The Slovenian artist and Jesuit Marko Rupnik and his team, made up of some twenty people from different countries around the world, have worked intensely at the Shrine of the Cave of Saint Ignatius, in Manresa, installing the set of mosaics they have created for the side naves of the Shrine.

The work captivates all who contemplate it, for the strength of its message, its beauty and the fascinating process involved in its creation. There are more than 550 square metres of mosaics, showing the Christian pilgrimage through the Spiritual Exercises. “An itinerary of prayer,” the artist himself explained, “in which one moves from a professed Catholicism to a lived faith.”

In 2015, Marko Ivan Rupnik came to La Cova de Sant Ignasi and was offered the opportunity to present, through his art and from the experience of the Spiritual Exercises, the story of Salvation. From then on he worked with his team at the Centro Aletti in Rome to design each of the eight rooms that form the side naves of the church. When Rupnik and his team arrived in Manresa in March 2021, they unpacked several containers: marble from the five continents, crystals glazed with pigments selected from all over the world, gold and silver ceramic pieces, and more. But what was really important was the team of 22 artisans, of more than ten different nationalities, who worked day and night to complete the mosaics in two weeks. With Rupnik they had studied Eastern and Western Christian traditions, mastered different forms of art, ancient icons, classical mosaics, the Bible, history. They also made their work a time of prayer. In the experience of living the faith lies the energy to transmit the sacred story in this contemporary work of art that we contemplate today. 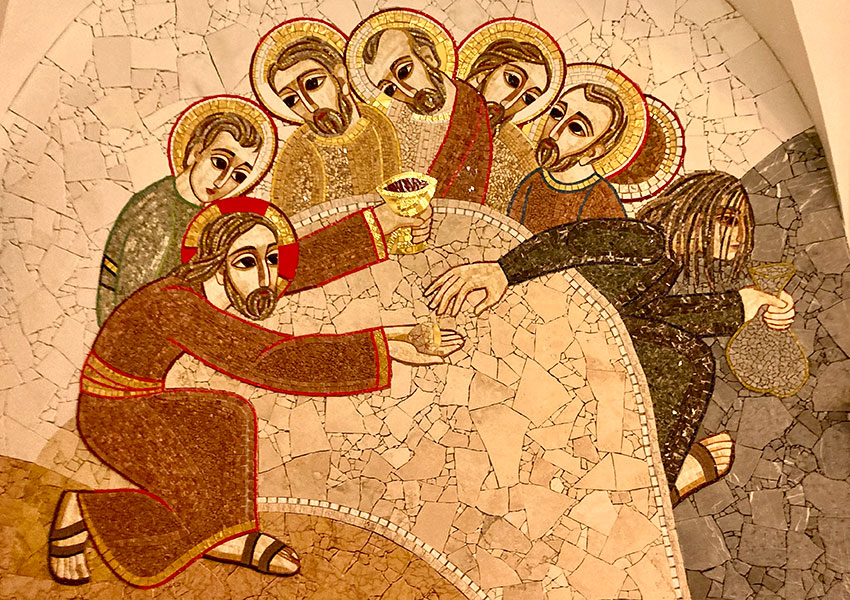 In the mosaics the light seems to come directly from the stones. Special care has been taken with the faces and hands of the characters in the scenes. In total there are 93 human figures in the shrine in 25 scenes from our life with God. The fragmented material becomes unified as it approaches the human and as the human approaches the divine. There is also a colour code that accompanies the whole work: for example, gold, red and white contain the presence of God, but grey and black are the absence of good, the absence of light and the remoteness of God.

When we asked Rupnik what we could call the mosaic ensemble of this work of art in the Shrine of La Cova de Sant Ignasi, he replied: A SPACE OF ENCOUNTER.

The Jesuit explained that the mosaic is an extraordinary art form that implies a communitarian experience. “An experience of Church, as a communion of people, which expresses what we are.” The artist assures that, in this technique, a dialogue is established with the stone. “The first lesson in cutting the stone is to handle it with love, with tenderness.” 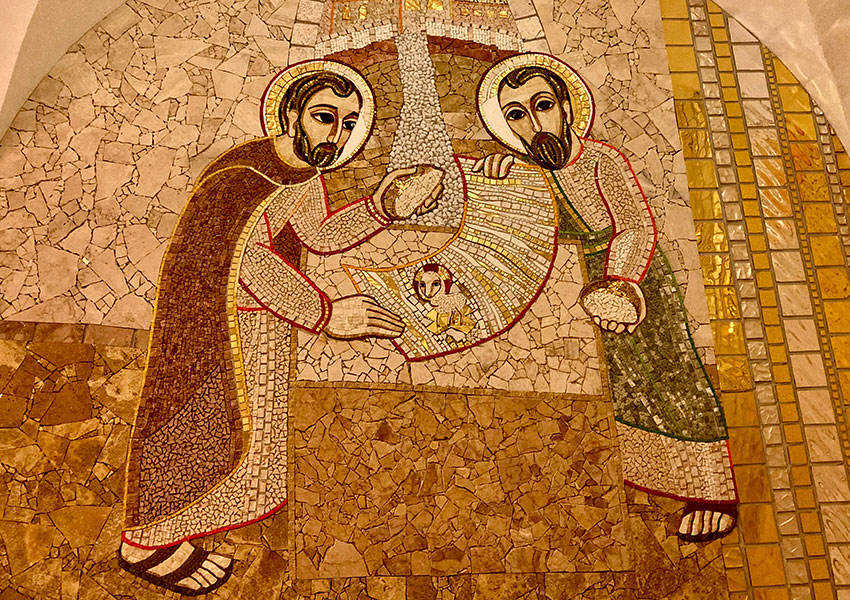 To be able to carry out this work right in the place where Saint Ignatius of Loyola began to write the book of the Exercises represents, for this Jesuit artist, a gift that he receives with “immense gratitude” and also as “a culmination of what I have thought about and studied all my life.”

After months of installation, the work was completed with a warm lighting installation to help foster recollection and prayer. The Shrine was reopened to the public in April, while the solemn act of inauguration took place on St. Ignatius Day, 31 July, in the presence of the Superior General of the Society of Jesus, Fr. Arturo Sosa, who presided over the blessing of this work of art.

The remodelling of the interior of the Shrine is part of the celebration of Ignatius 500, the year that commemorates, between May 2021 and July 2022, the conversion of the founder of the Jesuits. A celebration that is intensely lived in Manresa, since it coincides with the 500th anniversary of his arrival in this city.

JCEP Ignatian Year Spirituality
Share this Post:
“Those who seek the Lord lack no good thing” (Ps 34:10)
The “Camino Ignaciano”: a path to follow in these times that demand radical change
Posted by Communications Office - Editor in Curia Generalizia