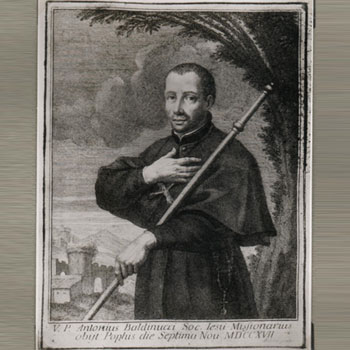 Although his poor health prevented him from going as a missionary to India, China or Japan, Anthony Baldinucci (Antonio Baldinucci, 1665-1717) carried out an arduous missionary life as in his own country. He was born near Florence and entered the Jesuits at the Roman novitiate of Sant'Andrea in 1681.

During the years when he studied theology in Rome, Baldinucci frequently spent Sunday afternoons in public squares encouraging those who gathered around him to attend the missions being given in local parishes. For the rest of his life he continued this practice. Between 1697 and 1717 he visited 30 dioceses and gave an average of 22 missions per year. Baldinucci's preaching was simple yet vivid, at times dramatic and always effective. People recognized him as a man of deep prayer and extraordinary penance.

In 1697 Father Baldinucci started his first assignment, working in the Jesuit parish in Frascati, a town outside of Rome. For four months of the year he went around nearby cities and villages giving missions. He continued this work for 20 years, working out of either Frascati or Viterbo, a city north of Rome. He walked barefoot to his mission assignment, no matter what the weather, carrying a pilgrim staff in hand and his notes and few traveling necessities in a bag on his back. The missions, which lasted from eight to 14 days, centered on meditations from St. Ignatius' Spiritual Exercises. He regularly held a penitential procession to lead people to the sacrament of Reconciliation and always ended the mission with a communion service when everyone would receive the Eucharist. When he was not in the pulpit, he heard confessions or taught catechism. At the very end of the mission, he had a bonfire built outside the church; playing cards, dice, worldly books and songs were thrown into the fire. Others laid daggers and pistols at his feet.

His final mission was at Pofi where he arrived on Oct. 18, 1717 already in poor health. On Oct. 26 he became so weak he was put to bed where he lingered on until Nov. 7.