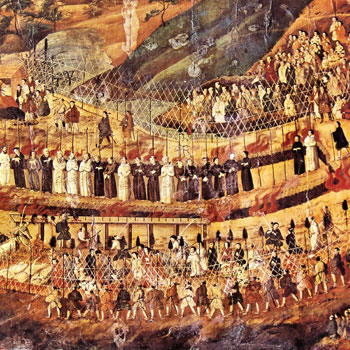 Sebastianus Kimura (1565-1622) was the first Japanese to be ordained a priest and the grandson of the first Japanese convert baptized by St. Francis Xavier. An eloquent preacher, his parents were Christian and his cousin was Brother Leonard Kimura. After studying with the Jesuits in Hirado and attending the seminary they ran in Arima, he entered the Society in 1582 and then studied theology in Macao. He was ordained a priest in Nagasaki in September 1601.

As a native Japanese, he found it easy to disguise himself and move around freely when the persecution began so that he could visit Christian homes and administer the sacraments to those in prisons. He dressed at various times as a soldier, merchant, laborer or physician. The police were especially eager to capture him, so his provincial advised him to move away until the danger passed. A servant betrayed him and he was arrested on June 30, 1621, along with his catechist, Thomas Akaboshi, and an assistant at the Jesuit residence, Louis Kawara. In the prison at Suzuta he was reunited with Father Carlo Spinola and other Christians. For a full account of his story, see the description under the name of Blessed Carlo Spinola.