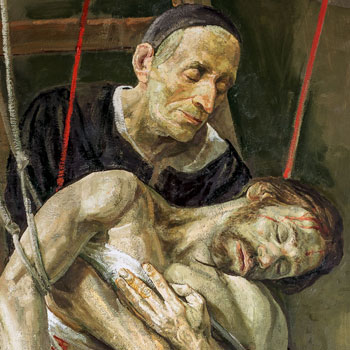 Joseph Pignatelli (Giuseppe Pignatelli, 1737-1811) was born in a palace but is honored for leading and sustaining Jesuits during the long and extremely difficult years when the Society of Jesus was suppressed. Both his Italian father and his Spanish mother were of noble descent, and Pignatelli lived in the family palace in Saragossa, Spain. When his mother died in 1743, his father moved the family to Naples. Four years later his father died.

Pignatelli returned to Saragossa in 1749 to attend the Jesuit school there and lived with the community. On May 8, 1753 he entered the novitiate at Tarragona and then followed normal formation path of studying philosophy and theology. He was ordained a priest the week before Christmas 1762 and spent the next four-and-a-half years in Saragossa performing humble apostolates: teaching grammar to young boys, visiting the local prison and ministering to prisoners condemned to be executed.

Father Pignatelli had given up the privileged life of a Spanish grandee for the simple routine of a Jesuit teacher, but that changed suddenly on April 3, 1767 when King Charles III expelled the Jesuits from his kingdom and confiscated their property. Five thousands Jesuits lost everything and instantly became homeless. Pignatelli could have claimed the privileges of his birth to remain in Spain, but he elected to accompany his Jesuit brothers in exile. The elderly rector at Saragossa presciently delegated his authority to the young priest. When the Jesuits from Saragossa arrived in Tarragona, they met other Jesuits waiting to be deported, among whom was the provincial, who also delegated his authority to Pignatelli, making him the religious superior of some 600 Jesuits.

A convoy of 13 ships left Spain carrying the Jesuits to exile in Italy, but they were not allowed to land at the port of Civitavecchia on Italy's western shore, nor at the port of Bastia on the island of Corsica. They finally landed at Bonifacio on Corsica's southern tip, but had to leave there a year later when France acquired the island from Genoa in September 1768. The Jesuits were packed into ships and taken to Genoa, the start of a 300-mile march to Ferrara in the Papal States. Jesuits who were old or in ill health found the journey difficult; all finished it exhausted.

The exiles found a welcome in Ferrara through the kindness of Pignatelli's cousin, Msgr. Francis Pignatelli, a future cardinal, but they lived in a tenuous situation since the princes of Europe were pressuring Pope Clement XIII to suppress the Society of Jesus. He resisted but his successor, Clement XIV, yielded to the pressure and on July 21, 1773 decreed the dissolution of the Society of Jesus by his brief Dominus ac Redemptor noster. Pignatelli and 23,000 other men were suddenly ex-Jesuits, no longer bound by their vows. The priests were still priests, but brothers and scholastics were suddenly laymen.

Pignatelli moved to Bologna and for the next 24 years kept in contact with his dispersed brothers. He took on a more active role when he wrote to the Jesuit provincial in White Russia (today's Belarus) asking for readmission. Catherine the Great of Russia had forbidden the papal brief of suppression to be promulgated in her territories, so the Jesuits in White Russia continued without interruption. Ferdinand, duke of Parma, also wanted to have Jesuits in his territory so he began negotiations with the Jesuits in White Russia. In 1793 three Jesuits came to his duchy to open a Jesuit community. Pignatelli associated himself with the group. Finally on July 6, 1797, at age 60, he again pronounced his religious vows. Two years later he became novice master at Colorno, the only Jesuit novitiate in western Europe at that time. On May 7, 1803, the superior in Russia appointed him provincial of Italy.

A period of turmoil followed these promising developments. When French troops occupied the duchy of Parma in 1804, the Jesuits went into exile in Naples where Pius VIII had, by a special brief on July 30, 1804, restored the Society in the Kingdom of the Two Sicilies. Many former Jesuits went there to rejoin the Society. Pignatelli only enjoyed Neapolitan hospitality for two years before Joseph Bonaparte overran the country and forced the non-native Jesuits to leave. They migrated north to Rome where Pius VII welcomed them; they set up a regular community at St. Pantaleon's near the Roman Coliseum and soon had a novitiate in Orvieto.

Fr. Pignatelli had been an exile for 40 years when he arrived in Rome, still cherishing the hope that the Society would be fully restored but resigning himself to not seeing it during his lifetime. During his last two years his health weakened and he suffered from hemorrhages, probably caused by stomach ulcers. In October 1811 he was confined to bed. He died peacefully on Nov. 15, three years before Pius VII restored the Society.