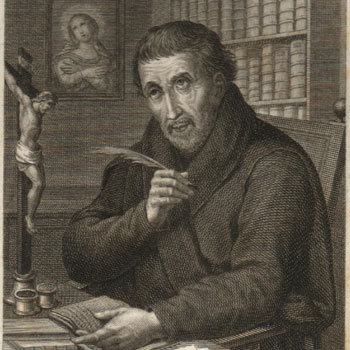 Peter Canisius (Peter Kanis; 1521-1597) is honored as a Doctor of the Church for his heroic defense of Catholicism through teaching, preaching and writing catechisms. He was also one of the giants of the young Society of Jesus, serving as the first provincial of Germany, a post he held for 14 years. A man of great energy, he founded 18 colleges and authored 37 books; his catechisms went through 200 printings in his lifetime alone.

Born in Nijmegen, Netherlands, he studied at the University of Cologne where he earned a master's degree in May 1540. He changed his original plan to remain at the university and study theology when he heard about a newly-founded religious order, the Society of Jesus. One of its founders was then at Mainz, so Canisius traveled there to meet Father Peter Faber. The Jesuit appreciated Canisius' potential and agreed to lead him through the 30-day retreat known as the Spiritual Exercises. During the second week of the retreat, Canisius made an election to join the Society and Faber accepted him as a novice on his 22nd birthday, May 8, 1543.

Canisius returned to Cologne and finished his studies in theology and then was ordained in 1546. Even before he became a priest, he taught Scripture and published new editions of texts of Cyril of Alexandria and Leo the Great. Then he served as theological consultant to Cardinal Otto Truchess at the Council of Trent before going to Messina, Sicily, to teach in the very first school the Society founded.

In September 1549 Pope Paul III asked him to return to Germany to head an effort to defend the Church against the attacks of reformers. The young Jesuit received the almost impossible mission of halting the defections of Catholics and winning back those who had already left the Church. Canisius first went to Ingolstadt, Germany and established a pattern he would follow elsewhere. He began teaching at the university, but also devoted great efforts to preaching so that he could explain the fundamental truths of Catholic teaching from the pulpit. His work had an immediate impact on Catholics there.

Canisius subsequently taught and preached in Vienna, Prague and Fribourg. He also founded seminaries and colleges. During his time in Vienna Canisius first developed the catechism for which he is most known. Written in Latin, Summary of Christian Doctrine, was published in April 1555 and devoted most of its attention to the theological points of controversy between Catholics and Protestants. Aimed at college students, it was followed by shorter versions for secondary students and for children.

As the first provincial of Germany, Canisius made a huge contribution to Jesuit governance in the region that included Swabia, Bavaria, Austria and Hungary. He visited Jesuit houses, supervised expansion and made the Society of Jesus a leading force in the Counter Reformation. He also took part in ecumenical gatherings such as the one in Regensburg (1556-1557) and returned to the Council of Trent in May 1562.

Canisius lived a full life and died peacefully at age 76 in Fribourg, Switzerland.