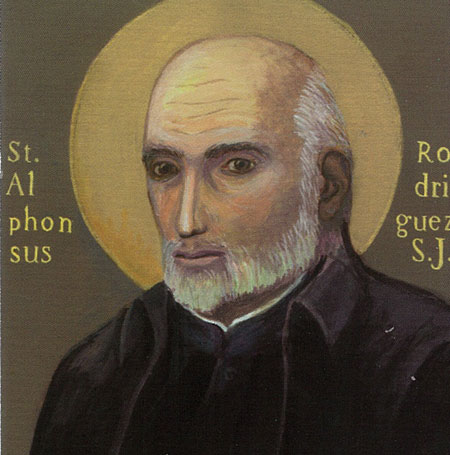 Alphonsus Rodriguez (Alfonso Rodriguez, 1533-1617) gained enduring fame for the extraordinary holiness that shone out of the very ordinariness of his work as the Jesuit doorkeeper of a school. He was born in Segovia, Spain, the second son of a successful wool and cloth merchant whose comfortable household provided hospitality to Father Peter Faber, one of St. Ignatius' first companions, when that Jesuit came to Segovia to preach. Faber helped the young boy prepare for his first communion, but Rodriguez's path to the Society of Jesus was slow and indirect.

When he was 12, his father sent him to the new Jesuit college at Alcalá, but studies abruptly ended when his father died. Alphonsus helped his mother run the family business and eventually took over its management altogether. At age 27 he married Maria Suárez with whom he had three children, but family life ended when all four died. Then heavy taxes drained the life from his business which eventually fell apart. The young widower viewed himself as a failure.

In his distress he turned to the Jesuits, recently arrived in Segovia, for spiritual direction. Through the inconsolable death of his wife and family, God led Rodriguez to an extraordinarily intimate relationship with himself. The widower spent sad and lonely years in prayer, seeking to do God's will. He wanted to give himself to God as a Jesuit and offered himself as a candidate for priesthood, but his advanced age of 35, poor health and limited education made him unsuitable in the eyes of the Jesuits who interviewed him for entrance. In 1568 he moved to Valencia, where his spiritual father had been transferred, and spent two years seeking the education necessary to become a priest. He was willing to become a Jesuit brother if priesthood was out of the question, but the fathers who examined him in Valencia came to the same negative conclusion as before. The provincial, however, recognized his holiness and gave him permission to enter the Society of Jesus.

On Jan. 31, 1571, at 37 years of age, Rodriguez entered the Jesuit novitiate but was sent only six months later to the college of Montesión in Palma on the island of Majorca, off the Spanish coast. There the new brother would finish his novitiate and become famous for his humble job of door-keeper and his friendship with another Jesuit saint, Peter Claver, apostle to the slaves recently arrived in Colombia.

In 1579 Rodriguez became the college's door-keeper, whose duties involved receiving visitors, searching for Jesuits or students whom someone sought, delivering messages, running errands, distributing alms to the needy, and–most importantly—consoling the troubled whom had no one else to turn to. It was repetitious and monotonous work, demanding much humility, but Rodriguez imagined everyone who knocked at the door to be the Lord himself and greeted everyone with the same smile he would have given God. Students felt the presence and influence of Brother Alphonsus and came to him for advice, encouragement and prayers.

He was 72 when Peter Claver came to the college, aflame with a desire to do something for God but uncertain how to do so. The two became friends and often discussed prayer and holiness as they walked around the school grounds. The older mentor encouraged the student to go to the South American missions.

The Jesuit doorkeeper was always appreciated for his kindness and holiness but only after his death did his memoirs and spiritual notes reveal the quality and depth of his prayer life. The humble brother had been favored by God with remarkable mystical graces, ecstasies and visions of our Lord, our Lady and the saints.