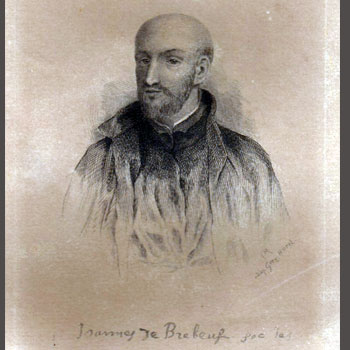 John de Brébeuf (Jean de Brébeuf, 1593-1649) was the first Jesuit missionary in Huronia (1626) and a master of the Indian language. He founded mission outposts, converted thousands to the faith and inspired many Jesuits to volunteer for the missions of New France. Massive in body, gentle in character, with the heart of a giant, he was known as the apostle of the Hurons.

Brébeuf was born in Normandy, France and entered the Jesuits after he finished his university studies. In a spirit of humility, he asked to be a brother, but his superior convinced him to study to be a priest. He taught at a secondary school-level college in Rouen and then was ordained a priest on Feb. 19, 1622. That same year he became the treasurer of the college. The tall, rugged Jesuit responded to an appeal made two years later by the Franciscan Recollects who asked other religious orders to help evangelize the native peoples of North America. Along with four other Jesuit companions, Brébeuf arrived in Quebec June 19, 1625. While Brébeuf waited for the Hurons to arrive, he joined a group of Montagnais in a hunting expedition that lasted from that October until the following March. The young French priest learned to accommodate himself to the native way of travel and diet.

When summer came a group of Hurons came to Cap de la Victoire to barter for trade goods. Brébeuf, another Jesuit and a Franciscan went to meet them and asked to accompany them back to their homelands. The Hurons were willing to take the first two, but not Brébeuf who towered over them and was much too big for their canoes; they were afraid he would be too much work to carry. The missionaries offered enough gifts to overcome reluctance, and Brébeuf was permitted into a canoe on the condition he would not move. On July 26, 1626 Brébeuf began his journey to Huronia. When the travelers came to cascades or places where they had to carry the canoes and all the gear overland, Brébeuf's great strength won his hosts' admiration. They named him, ""Echon"" (""the man who carries the load"").

The party arrived in Huronia in late August, and the missionaries settled in Toanché, a village of the Bear Clan of the Huron nation. Brébeuf first had to learn the Huron language, which he devoted two years to studying, along with the people's customs and beliefs. He had a talent for languages and wrote a Huron grammar, translated a catechism and prepared a phrase book. His success with language did not carry over into converting adults; the only converts he made during the winter of 1628 were the dying whom he baptized.

Brébeuf's missionary efforts were cut short when he was sent back to France after the French and English ended their war. An English blockade had kept the French from resupplying the colony, so Brébeuf took 20 canoes loaded with grain to Quebec on July 17, 1629. Two days after he arrived, the French capitulated and he was expatriated with other missionaries to France.

For two years Brébeuf resumed his work at the college in Rouen, but returned as soon as possible to Canada when it was restored to France by a treaty with the English. He arrived in Quebec in May 1633, but could not get back to Huronia until the following summer when the Hurons came with a small flotilla of 11 canoes rather than their normal one of more than a hundred. They had suffered from an epidemic and did not want to be burdened carrying missionaries back with them, but Brébeuf and Father Anthony Daniel prevailed upon them. The two were separated from their hosts during the journey but found the Hurons at a village named Taendeuiata. They welcomed Brébeuf back, delighted that he had kept his word to return. The Jesuits constructed a cabin just outside the village to house the three priests and five lay helpers who made up the missionary community. Brébeuf taught the others the Huron language and customs. Finally in 1635, he and Daniel began their missionary work, working with children during the day and adults at night. After a year of hard work, they had baptized twelve people, four infants and eight adults just as they were dying.

Competition between Christianity and native religion was a constant fact of life. When drought hit the land, native religious leaders blamed it on the crucifix on the priests' cabin; the Jesuits countered with a novena and a procession around the village. When which rain the prayers, the Jesuits interpreted this as an answer to their prayers. When Father Isaac Jogues arrived in 1636, a smallpox epidemic broke out among the Jesuits and their helpers and then spread to the Hurons. The epidemic lasted all winter; during that time the Jesuits baptized more than a thousand people, all at the point of death. Some Hurons accused the Jesuits of causing the epidemic in order to make conversions. When Brébeuf started a mission at Ossossané, the council of village chiefs blamed him for the disease that lingered on there and decided he should die. That same conclusion was reached for all the Jesuit missionaries during a council of the Huron nation which met in March 1640.

Brébeuf then moved to the mission headquarters, Sainte-Marie, and started working with another tribe, the Neutrals, but he had to flee to Quebec after he was accused of plotting with Hurons' enemies, the Seneca Clan of the Iroquois, to betray his hosts. From June 1641 to August 1644 Brébeuf took care of getting supplies for the mission. Finally he was able to return to Sainte-Marie, but the danger from the Iroquois was escalating. Fathers Isaac Jogues and Anthony Daniel had already been martyred. In September 1648 Father Gabriel Lalemant joined the mission. He and Brébeuf left Sainte-Marie for their weekly tour of the missions on March 15, 1649 and spent the night at Saint Louis village. The Iroquois attacked a nearby village during the night, so the Hurons sent their women and children to hide in the forest. The two Jesuits chose to remain with the men, who were mostly Christians. At dawn the next day, Iroquois swarmed over the palisades and took the Hurons who remained as captives. A renegade Huron among the attackers let the Iroquois know that they had captured the mighty Echon, most powerful of the Jesuit medicine men.

After some preliminary torture, the Jesuits and the Huron captives were forced to run naked through the snow to a nearby village where others waited. The captives had to run the gauntlet and then the two Jesuits were led to two posts where they were to be killed. First the captors heated a string of hatchet blades and then placed the red-hot iron on Brébeuf's shoulders. He did not yell for mercy, so his tormentors covered him with resinous bark which they set aflame. He continued encouraging his fellow Christians to remain strong. Then the Jesuit's captors cut off his nose and forced a hot iron down his throat to silence him; they poured boiling water over his head in a mockery of baptism and then successively scalped him, cut off his feet and then tore out his heart. He was 46-years old and had spent 20 years in New France.