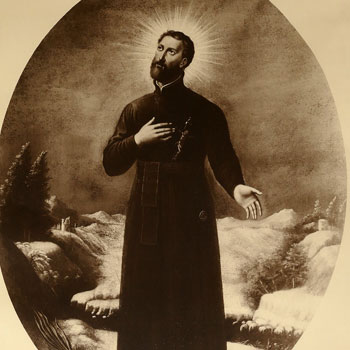 Diogo Carvalho (1578-1624) returned to Japan after all the missionaries were banned in 1614 and ministered to Christian miners in the cold, northernmost island of Hoddiado. A native of Coimbra, Portugal, Carvalho joined the Society of Jesus in 1594 and studied in Goa and Macao, where he was ordained in 1608. The following year he moved to Japan. After a year learning the language, he spent four years evangelizing without interference or fear until the Shogun Iyeyasu issued his decree banishing all missionaries. Carvalho was deported along with 100 other Jesuits who went to Macau. His heart remained in Japan, however, and he secretly returned in 1616. Later he relocated in the north to serve refugees fleeing persecution in the south.

Carvalho's ministry centered on the silver miners in the districts of Oshu and Dewa. Living conditions were difficult, but conversions were abundant. In December 1623 he was working in Miwake when the local prince began to persecute the Christians and ordered soldiers to kill all who refused to apostatize. When the governor of Sendai learned of Father Carvalho, he went searching for him, but the Jesuit and about 60 Christians fled into a deep valley seeking to escape. Unfortunately, their tracks in the snow led the soldiers to them, and Carvalho gave himself up in an attempt to allow his people to get away. He was able to save all but 12 of his companions. Then the Christians had to march for seven days through the cold to Sendai. Two who could not keep up were killed on the spot, and the rest were barely given enough food to eat to survive their month-long imprisonment once they reached the city.

Martyrdom came for Carvalho and his companions through the cold. The Hirose River flowed near the fortress where they had been imprisoned; on its bank the soldiers dug a hole and filled it with icy water from the river. The prisoners were forced first to sit naked in the freezing water and then stand up to let the wind hit them. Their captors promised to end the torture if they would renounce Christianity. None did, and the cold slowly took away their life. Carvalho was the last to die, enduring the torture long into the night before he also finally perished. The names of his companions are unknown, so they could not be beatified with him.