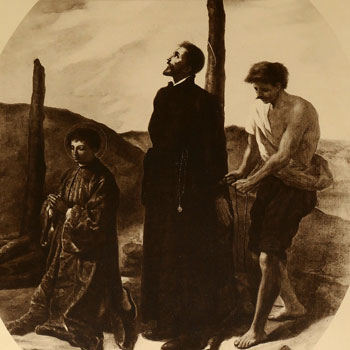 Miguel Carvalho (1579-1624) was a Portuguese missionary whose eagerness to begin his ministry landed him in prison not long after he finally arrived in Japan. Carvalho went first to Goa, India where he completed his studies and was ordained. Despite his desire for Japan, he remained in Goa teaching theology for 10 years before setting sail in early 1619. He was shipwrecked off Malacca and was unable to find a boat for Japan. He went through Macao to Manila en route to Nagasaki where he landed in 1621 disguised as a Portuguese soldier. The Great Persecution against Catholics was in force; missionaries had to exercise their priesthood in secret. Carvalho spent two years on an island near Nagasaki learning Japanese.

He was banished from the island when he rashly confronted its governor and openly proclaimed his intentions to preach the Gospel and convert people. The provincial sent him to minister to Christians in Omura. On his return to Nagasaki, he was nabbed by a spy who turned him into the police. Along with a Dominican, two Franciscan priests and a catechist, Carvalho was imprisoned for 13 months in an outdoor enclosure under very harsh conditions. Finally, they were taken out to be burned at the stake, with wood carefully arranged so that it would not go up in flames all at once. Carvalho spoke to the onlookers, ""You must understand that we are Christians and that we die of our own free and voluntary accord for the faith of Christ our Lord."" The martyrdom lasted almost two hours.