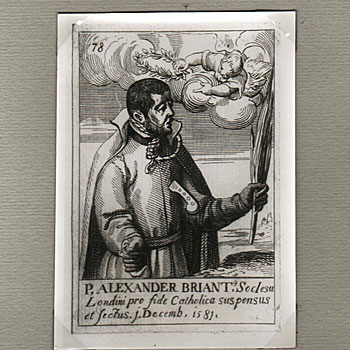 Alexander Briant (1556-1581) was a diocesan priest who entered the Jesuits just before he was executed. He studied at Oxford where one his teachers had been Robert Persons who later became a Jesuit and slipped into England with Campion. Briant crossed the Channel in August 1577 to attend the English College at Douai where he was reconciled to the Catholic Church. He was ordained in 1578 and in August 1579 returned to his homeland and took up ministry in his native shire. He was only able to care for Catholics for two years before priest-hunters caught him by accident.

They searched unsuccessfully for Fr. Persons in one house, and then went to a neighboring house where they discovered Fr. Briant. His captors kept him without food and with little to drink for six days hoping to force information from him about Persons. He refused to speak so he was transferred to the Tower for further interrogation and torture on the rack. He wrote to the English Jesuits about his torture, saying that he kept his mind so firmly set on Christ's Passion that he felt no pain during the torture, only afterwards. He also wrote that just before he was tortured a second time, he had determined to enter the Jesuits if he were released from prison. However, since he doubted that he would be released, he asked to be accepted into the Society. The Jesuits accepted him upon receiving his letter.

Almost two weeks later Briant was dragged through the muddy streets of London to Tyburn. With him were Campion, and Father Ralph Sherwin, a diocesan priest. Briant had been tried a day after Campion, but was executed soon after the other Jesuit. He was cut down while still alive after being hung so that he could be disemboweled and his body cut into quarters. He was only 25 years old.