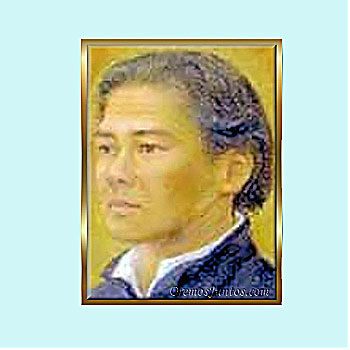 Diego Yuki Ryosetsu was born of samurai stock in Tokushima on the island of Shikoku: his father was a younger brother of the Ashikaga shogun, who had preceded Oda Nobunaga as head of the realm. He enrolled in the Jesuit seminario upon reaching school age. In 1597, after ten years of study there, he was received into the Society of Jesus, From 1601 to 1604 he did theological studies in Macao, but was not ordained a priest. After his return to Japan, he was sent to work in the central provinces of Japan, where he proved to be a very capable and successful missionary. He even traveled as far as Shikoku, where he had the pleasure of preaching to his Ashikaga relatives and even baptizing several of them. In 1612, he moved to Nagasaki to prepare for ordination, but the bishop who was to have ordained him fell ill and died.

In 1614 Ieyasu ordered all missionaries to leave Japan. At the same time he ordered the great Catholic daimyo Takayama Ukon to go into exile in Manila. Yuki decided to go with him to Manila, and one year later he was ordained a priest in the Philippines. Yuki returned secretly to Japan in 1616, and was sent to minister to the Christians in central Japan. For twenty years he continued to do pastoral ministry all through the central provinces.

In the end, shogun Hidetada's persecution of the missionaries in central Japan was so effective that Yuki was the only priest remaining to minister to the Christians. (Everywhere he went he was accompanied by his faithful catechist Soan.) In 1636, Ryosetsu too was captured, in the mountains of Shikoku. Sent to Osaka for interrogation, he was asked to give the names of those who had given him lodging. But his persistent answer was that no one had given him lodging, that he had lived in the hills and the fields, warding off starvation by eating only what nature provided him. Seeing the weak and emaciated condition of the old man, his interrogators believed him. Thus, he alone was condemned to death; none of those who had helped him were made to share his fate. On February 26, he was condemned to die in the pit. He was 61 years old. His faithful catechist, Soan, who had been beside him all through his travels, was his companion to the end and died at his side.