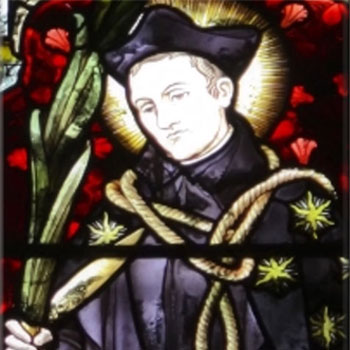 Thomas Cottam (1549-1582) was sentenced to death at the same trial as Edmund Campion, but had to wait six months to follow his more famous companion to martyrdom. His ministry was very limited because English spies in France targeted him before he even left for England, and he was arrested as soon as he arrived.

Cottam was born of Protestant parents and received a good education, earning a bachelor's degree from Oxford in 1569. He became a schoolmaster in London, where he became a Catholic and was encouraged to become a priest. In May 1577 he left England for Flanders to attend the English College at Douai. After he was ordained a deacon, he traveled to Rome and entered the Society in April 1579. He wanted to become a missionary to India, but became ill so his physician suggested that he return north to recover his health.

A brief stay in Lyons, France, did not improve his physical condition but it set the stage for his eventual arrest because he met there a man named Sledd, an Englishman who sought to identify priests who would be returning to England. Sledd pretended to befriend the young Jesuit and traveled with him as far as Rheims before leaving him to give the English ambassador in Paris a detailed description of Cottam.

Cottam was ordained a priest at Soissons, France, on May 28, 1580, and departed for England a week later. Port authorities were waiting to arrest him because of the information from Sledd, and they recognized the Jesuit priest immediately. Cottam was able to escape because the lawyer who was responsible for accompanying him to London allowed him to get away. That act of kindness put the lawyer in peril, so Cottam turned himself in to save the lawyer.

Cottam was charged with being a priest, which led to his imprisonment in the Tower of London where he suffered horrible tortures. He was tried along with Father Campion, and condemned to die, but he had to wait six more months for the sentence to be executed. On May 30, 1582, Cottam and three diocesan priests were dragged to Tyburn to be hung and quartered. The Jesuit had to watch his three companions die before his own turn came. Afterwards the four bodies were cast into vats of boiling water so that bystanders could not take