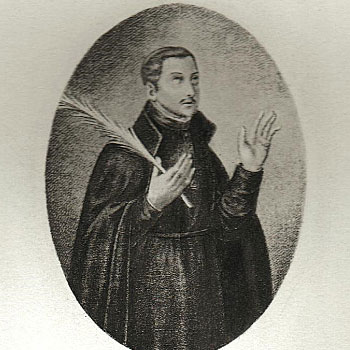 Thomas Garnet (1575-1608) was imprisoned on three different occasions, but would not be deterred from caring for English Catholics. He was arrested for the last time when the man in whose home he was staying was implicated in the Gunpowder Plot to blow up the houses of parliament. A native of London, Garnet’s parents were loyal Catholics who allowed him to attend the newly-opened Jesuit college in Saint-Omer, Flanders. He wanted to continue his studies at the English seminary in Valladolid, Spain, but landed at England rather than Spain when a storm pushed the ship off course. Garnet and five companions were arrested, but they all managed to escape and eventually to make their way to Spain. Garnet finished theology studies in 1599, was ordained a priest and then returned to England.

For six years the young priest worked fearlessly among Catholics who refused to accept the queen's supremacy in religious matters. Inspired by the example of his uncle, Father Henry Garnet, the superior of the Jesuits in England, the young priest decided to enter the Jesuits himself. He was accepted in September 1604 but could not do anything further before he was caught in the entangling web of the Gunpowder Plot. Although he himself was innocent, he was captured when government agents searched for Thomas Rookwood, in whose home Garnet resided. Rookwood was involved in the plot, but Garnet could say nothing of it because he was not part of it. Eventually his captors concluded he had no information to divulge, and sent him back to prison where he remained for seven months until a group of 47 priests were deported to Flanders to make room for other, more dangerous priests. All were warned that they would lose their lives if they returned.

Garnet made his way to the English novitiate at Louvain, and took his vows there a year later, on July 2, 1607. In September he returned to England but was arrested within six weeks when an apostate priest betrayed him. He was taken back to the same prison he had endured before, but would give no information when he was interrogated. On June 19, 1608 he went to trial at Old Bailey, indicted for being a priest under orders from Rome. The only evidence against him was the testimony of a witness who claimed he had once seen a letter on which Garnet had signed his name and then added, ""priest."" He was found guilty of high treason and condemned to be hanged. Four days later he was dragged to Tyburn for execution. During the customary final speech he said that he was indeed a priest and a Jesuit and that he was happy to die for his Lord. He was 33 years old at his death.