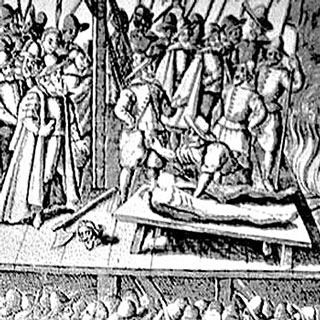 John Nelson (1535-1578) became a Jesuit in prison just before he was martyred. A man of unshakeable convictions, he died two years before the English mission began, but he provided the same fearless service to Catholics that Jesuits later lived and died for. The son of Sir Nicholas Nelson, he was born in Yorkshire about 1535. He was firm in his conviction that Catholics should be bold in professing their faith and did not accept the practice of attending Protestant services to avoid penalties. Finally he left England when he was almost 40 and studied at the English College in Douai. He was ordained a priest at Bynche in June 1576 and set out with four other newly ordained priests the following November to return to England.

Little is known about Father Nelson's ministry except that it lasted only one year before he was arrested on the evening of Dec. 1, 1577 when priest-catchers burst into his residence as he was reading his breviary. They arrested him on suspicion of being a Catholic; but when he was brought before the queen's high commissioners and asked who the head of the Church was, he boldly answered that it was the pope, thus sealing his fate. His trial took place February 1 and featured the comments he made before the commissioners; since he refused to take the oath acknowledging the queen's supremacy in religious matters, he was found guilty of high treason and condemned to be executed as a traitor. Nelson had admired the Jesuits but their mission to England did not begin until two years after his death. He wrote to the French Jesuits asking to be admitted, and they were pleased to accept a priest about to be martyred. He was kept in a foul dungeon for two days and then dragged to Tyburn to be executed. As he gave his final words to onlookers, he was hanged but then cut down while he was still alive and disembowelled. He was beheaded and quartered with his body parts exhibited on London Bridge and the city gates as a warning.