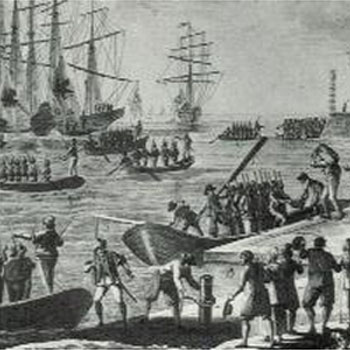 John Nicholas Cordier (1710-1794) survived the French Revolution only to fall victim to the violence during the Reign of Terror. A native of Souilly, in the Duchy of Lorraine, Cordier entered the Jesuits in 1728, and then studied philosophy before teaching at the colleges in Dijon, Auxerre and Autun. After theology studies he received a doctorate, and then taught philosophy at Strasbourg and then theology at Pont-à-Mousson. He later served as prefect of studies and superior of the Jesuit residence in Saint-Mihiel, where he remained as the chaplain to a convent of nuns after the Society was suppressed.

In 1790 the government suppressed all religious orders in France, and Cordier accepted shelter from Canon Georges-Fran & ccedile;ois Steinhoff in Verdun. Despite his advanced age, Cordier was arrested on Oct. 28, 1793 and ordered to be deported. He waited in prison for six months before joining the convoy of priest-prisoners on their way to Rochefort for eventual deportation to Africa. On June 19 the elderly priest boarded the ship, Washington, a former slave slip which never set sail because the English navy had successfully blockaded the French coast.

The deportees suffered horrible conditions in the crowded, unsanitary underdeck. During the day they were allowed on deck, but space was so limited that they could only stand packed together. A single daily meal of boiled beans, wormy bread and rancid was insufficient to prevent respiratory problems, scurvy and typhus. Several priests died each night, but the number increased as summer's heat increased. Finally the boats had to be moved further down-river from the port, and a makeshift hospital set up on an island in the channel. When Cordier became ill, he was moved to the hospital, which was actually an improvement on the prison ship. He died there and was one of 254 victims buried in the sand.