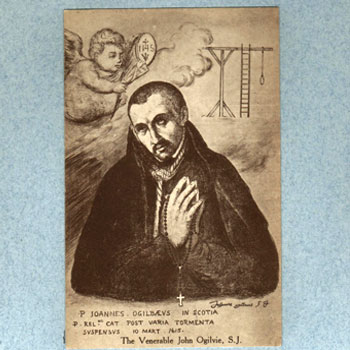 John Ogilvie (1579-1615) performed ministry in his native Scotland for only 11 months after he returned to his homeland following 22 years abroad. He is the only canonized Scottish martyr from the time of the Reformation, and was only 36 when he gave his life for Christ.

Ogilvie was raised a Calvinist but decided in 1596 to become a Catholic during a study tour in France, Germany and Italy. He went to the Scots College in Louvain, Belgium, where he was reconciled to the Catholic Church. When that college closed because of financial difficulties, he studied with the Benedictines and then transferred to the Jesuit college at Olomouc. He entered the Austrian province of the Jesuits at Brno in Moravia on Nov. 5, 1599 and studied philosophy at Graz and Vienna and theology back at Olomouc. He was ordained in Paris towards the end of 1610. Ogilvie was eager to return home to do missionary work, but Scotland was then too dangerous for a Catholic priest. The young Jesuit worked in Rouen, France, for three years before he finally received word to begin his apostolate in Scotland. He landed at Leith, Scotland in November 1613, disguised as a horse dealer named John Watson. He gradually made his way to Edinburgh where he had considerable success reconciling people to the Church. On Oct. 3, 1614 he went to Glasgow where he was to receive five individuals back into the Church; one of the five, Adam Boyd, betrayed him to the Protestant archbishop.

Boyd informed the archbishop of Ogilvie's arrival and helped plan his capture. As Ogilvie waited at a designated spot in the market square to be taken to the service, he was surrounded by men who led him to the archbishop in a nearby house. The archbishop struck Ogilvie in the face; then the others beat him as well before imprisoning him in the bishop's castle. His first interrogation took place the next day, but Ogilvie refused to accept the king's supremacy in religious matters.

His captors then put Ogilvie into a dark, foul-smelling cell and tortured him to make him more cooperative at the next interrogation which took place on Dec. 12 in Edingburgh before a council appointed by King James I. After Ogilvie refused to give up his convictions, he was subjected to sleep deprivation torture for the following nine days. Finally he was interrogated for a third time on Dec. 22. Although physically worn out and mentally tired, the Jesuit refused to reveal the names of Catholics who attended his services or helped him. Authorities returned him to Glasgow prison where he began to write the story of his arrest and imprisonment. He managed to smuggle the account out, page by page, through the kindness of people who came to visit other prisoners.

Ogilvie underwent a fourth interrogation Jan. 18, 1615 when he was asked to respond to questions posed by the king himself. The questions touched on religious supremacy and were written in such a way that the Jesuit could choose only to renounce Catholicism or to condemn himself. Ogilvie answered unambiguously that the pope was supreme in religious matters, and that the pope had the power not only to excommunicate the king but also to depose him. These answers meant that he would be killed, so Ogilvie began to prepare himself for heaven when he was returned to his cell. When James I read Ogilvie's responses, he ordered the priest's trial to take place March 10 with the death penalty waiting if he did not change his answers. Ogilvie's trial took place at the Tolbooth in Glasgow's square; the Jesuit was charged not with celebrating Mass and converting Protestants but with high treason for denying the king's spiritual jurisdiction by upholding the pope's spiritual primacy. Two hours after the trial began, the jury found him guilty and condemned him to be hanged and quartered that very afternoon.

Ogilvie spent three hours in prayer while the judges and jury went to lunch. Then the sheriff came to escort him to the public square for execution. Holding his rosary, the Jesuit mounted the scaffold and prayed briefly before the hangman tied his hands and led him up the final ladder. After the executioner pushed him off the ladder, Ogilvie did not die immediately so the executioner grabbed his legs and pulled him down to end his agony. Despite the sentence to be quartered, Ogilvie's body was buried outside the city in a place reserved for criminals.