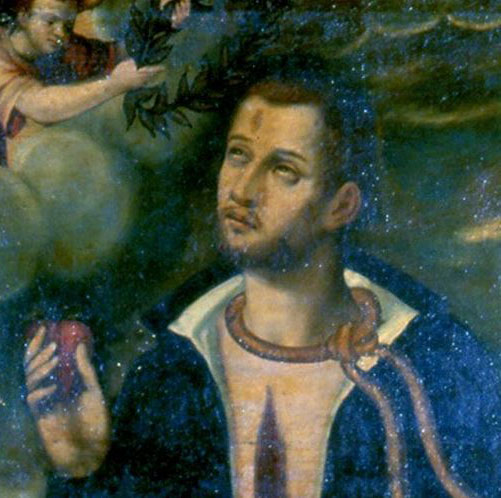 Dominic Collins (1566-1602) gave up the life of a soldier for the peace of religious life, but was executed when he accompanied a military force as a chaplain in a campaign to free Ireland from English Rule. Collins was born to a well-established family in Youghal in County Cork about the year 1566 when Elizabeth I was queen of England and Ireland. The Irish Parliament had established Anglicanism six years earlier as the official religion of the land. These laws were not fully enforced yet in Youghal, but young Catholic men had few careers open to them so young Collins chose to leave Ireland to seek his fortune in France. He managed to enlist in the army of the Duke of Mercoeur who was fighting against the Huguenots in Brittany. He served with distinction in the cause of the Catholic League for over nine years and rose through the ranks. His greatest moment came when he captured a strategic castle and was appointed military governor of the region.

With the passing of time Collins became less and less enamored of soldiering, even though King Philip II had granted him a pension and placed him in the garrison at La Coruña on Spain’s Bay of Biscay. During Lent 1598 he met a fellow Irishman, a Jesuit priest called Thomas White, whom he told of his desire to do something else with his life. He decided that he wanted more than anything else to join the Jesuits and serve as a brother. The superiors were initially reluctant to accept him because they felt that a battle-hardened soldier would never be able to settle into religious life. Dominic bombarded the provincial with requests and was finally admitted to the novitiate in Santiago de Compostela in northern Spain.

If he was seeking peace and quiet in religious life, he was not to find it. He had barely arrived in Santiago when the Jesuit College was struck by plague. Seven of the community were infected and many others fled for fear of catching the awful disease. Collins stayed on and tended the victims for two months, nursing some of them back to health and comforting the others in their last hours. He had proved his worth and completed his novitiate without further question. A report sent to Rome by his superiors states that he was a man of sound judgment and great physical strength, mature, prudent and sociable, though inclined to be hot-tempered and obstinate.

Ireland was in turmoil at this time. In Ulster O'Neill and O'Donnell were defying the power of the English crown and trying to call all of Ireland into revolt. In 1601 King Philip III of Spain decided to send an army to the help of the Irish rebels. A number of priests traveled with the expedition including an Irish Jesuit, Father James Archer who asked that Brother Collins be sent as his companion for the journey even though the priest had never met Collins. The two set sail on different vessels, however, which became separated during a storm. Collins' ship had to return to La Coruña before finally reaching Ireland. Collins arrived at Castlehaven on Dec. 1, 1601, only 30 miles from his native Kinsale, where the main part of the Spanish fleet was already ensconced. A large English army under Lord Mountjoy had laid siege to the town.

Irish forces converged on Kinsale from North and South. The leaders were Hugh O'Neill, Red Hugh O'Donnell and O'Sullivan Beare from West Cork. The Irish army surrounded the English on the outside while the Spanish faced the English from inside the town. The Irish attacked at dawn on Christmas Eve, but for reasons never fully understood, suffered a humiliating defeat, with no help from the Spaniards who remained within the town.

The Irish scattered, with the O'Neill and O'Donnell armies marching northward while O'Sullivan Beare led his people home to the Beare peninsula. Dominic Collins accompanied him in his retreat. Thus he found himself some months later besieged inside Dunboy Castle with 143 defenders. As a religious, Dominic Collins could not take part in the fighting but tended the wounded. After a bitter siege, with huge casualties, the defenders surrendered. Almost all were put to the sword, but on June 17 the Jesuit was taken off in chains for interrogation. He was savagely tortured and promised rich rewards if he would renounce his Catholic faith. Even though some of his own family visited him and encouraged him to pretend a conversion in order to save his life, he stood firm.

On Oct. 31, 1602 Dominic was taken to Youghal for execution. Before he ascended the scaffold to be hanged, he addressed the crowd in Irish and English, saying that he was happy to die for his faith. He was so cheerful that an officer remarked, "He is going to his death as eagerly as I would go to a banquet." Collins overheard him and replied, "For this cause I would be willing to die not once but a thousand deaths."