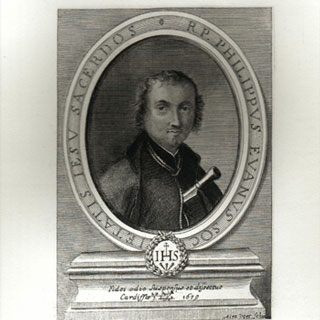 Philip Evans (1645-1679) is the only one of the many Jesuits to be martyred in England and Wales who learned of his execution date while playing tennis. A prisoner in Cardiff Castle, he was allowed to exercise. While he was engaged in a tennis match, he received the news that he would be killed the next day. Elated by the news, he asked if he could finish the match; not permitted to do so, he took up a harp back in his prison cell and sang praise to God for calling him to be a martyr.

He was born in Wales and studied at the English college at Saint-Omer in Flanders, where he entered the Jesuits and continued his studies. After he was ordained in 1675, he was missioned back to South Wales where he served four years before he was arrested. During that time he became known for his zeal and charity, and was fearless in caring for the Catholics entrusted to him. He refused to leave Wales when persecution of Catholics increased after the Titus Oates plot of September 1678 falsely accused Jesuits of planning to assassinate King Charles II. The government normally offered a reward of 50 pounds for the arrest of a Jesuit, but the local Welsh magistrate, a staunch Calvinist, offered an additional 200 pounds for the arrest of Father Evans. Despite the threat, the Jesuit continued serving as the chaplain of Christopher Turberville in Glamorgan, where the constables arrested him after he refused to take the oaths of allegiance and supremacy, which recognized the king as supreme in all religious matters.

For the first three weeks of captivity, Evans remained in solitary confinement in an underground cell. Then he was brought up to the regular prison where he joined Fr. John Lloyd, a diocesan priest. They waited five months before going to trial on May 3, 1679 because the prosecution could not find witnesses to testify that they were indeed priests. Eventually a woman and her daughter said that they had received the sacraments from the Jesuit, which was true. Evans was found guilty of high treason and sentenced to be hanged, drawn and quartered; but the execution was deferred until July 22 when the sheriff took both priests to Gallows Field, outside Cardiff. When Evans mounted the ladder at the gallows, he said, ""This is the best pulpit a man can have to preach in, therefore, I can not forbear to tell you again that I die for God and religion's sake."" At the time of his martyrdom, Father Evans was 34 years old and had been a Jesuit for 14 years.