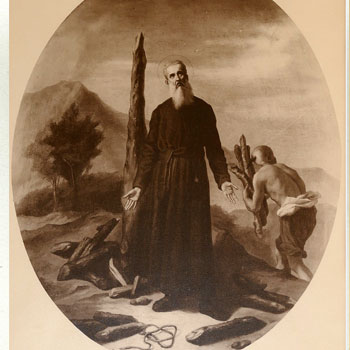 An eloquent preacher and apologist for the Church, Anthony Ishida (1570-1632) worked with the Jesuits as a catechist before entering the Jesuit novitiate in 1589. He was studying theology when Taikosama Hideyoshi ordered the execution of 26 martyrs, among whom were the Jesuits Paul Miki and his two companions. Ishida went into hiding until peace returned with the Taikosama's death in 1598. The date of Ishida's ordination is not clear, but he was an eloquent preacher and one of the best apologists of the Japanese Church. He knew Buddhism well and frequently took part in religious disputes with Buddhist bonzes. He went underground when the Great Persecution began in 1614 with Shogun Iyeyasu's decree forbidding the Christian faith and ordering all missionaries to be banished. Father Ishida practiced his ministry in and around Hiroshima, moving about in disguise. He was imprisoned in 1616, but was set free three years later when the daimyo who had imprisoned him died. Ishida then moved to Nagasaki where he continued his underground ministry for another 10 years.

Finally he was arrested in 1629 and was treated with respect by the governor of Nagasaki who considered setting him free except for his fear that such leniency would be reported to the shogun. After two years in prison, Ishida and his companions--three Augustinian priests, one Japanese priest and a Franciscan tertiary--were tortured in an attempt to force them to deny their Christian faith. They were taken to an extinct volcano with pools of scalding water and immersed six times a day for 33 days until their bodies were open wounds. Finally they were taken back to Nagasaki and condemned to be burned at the stake, with wood carefully arranged to burn slowly. Their ashes were cast into the sea.