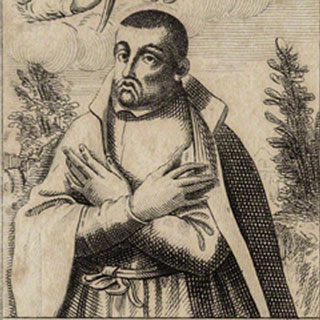 Edward Oldcorne (1561-1606) had a long and fruitful ministry in England operating out of the same residence for 16 years. Ralph Ashley (birthday unknown, 1606) entered the Jesuits in Valladolid, Spain, as a brother and was urged to return to his native England to recover his good health, a prescription that worked well until he was arrested with Father Oldcorne whom he assisted for eight years.

Oldcorne was born in York of a non-Catholic father and a Catholic mother whose courage when she was imprisoned for her faith set an example for her son who dropped medical studies to travel to Rheims, France in August 1581 in order to study for the priesthood. In 1583 he moved on to Rome where he finished his studies and was ordained a priest. Soon afterwards he asked to enter the Society of Jesus; he was allowed to complete his novitiate in a very short time because of the difficult conditions he would face upon his return to England. He landed on a remote beach near Norfolk in November 1588 and joined a group of sailors traveling to London where he stayed with Father Henry Garnet, the superior of the Jesuits in England. After a few months there he was assigned to Hinlip Hall just outside Worcester where he would enjoy one of the longest periods of any Jesuit ministering in England.

The master of Hinlip Hall was an ardent Catholic who was in prison and had left the property in the care of his sister, Dorothy, a Protestant who had been at Elizabeth's court and merely tolerated the presence of the priest guests in her brother's residence. Several priests had tried unsuccessfully to convert her back to her family's Catholicism, but she resisted all efforts. Finally Oldcorne began fasting for her conversion; when she learned of his fast, she yielded to God's grace and became an encouragement for many others in the shire to return to the Catholic religion. The Hall became the Jesuit's base of operations where many people came to seek the sacraments and hear Oldcorne's preaching. His success was accompanied by poor health ever since he returned to England. He had a throat cancer that left him with a hoarse and painful voice, but did not keep him from preaching. He made a pilgrimage around 1591 to St. Winifred's shrine seeking a cure. He returned with the cancer healed.

Catholics looked forward to the end of persecution when Queen Elizabeth died and James I became king on March 24, 1603. He had promised he would be more tolerant, but in fact, the persecution increased. Some angry Catholic laymen plotted to blow up the Houses of Parliament during the king's visit there on Nov. 5, 1605. Discovery of the plot intensified hatred of Catholics; the government was determined to implicate Jesuits in the so-called "Gunpowder Plot," despite the fact that the men behind it had already been captured. The Jesuit superior, Father Garnet, decided to leave London and seek shelter at Hinlip Hall, which had more hiding places than any other mansion in England. Brother Nicholas Owen, who had constructed those places, accompanied him. The two Jesuits joined Oldcorne and Ashley.

On Jan. 20, 1606, the sheriff of Worcestershire and over 100 men arrived at the Hall and spent several days fruitlessly searching for the priests. A man arrested for being involved in the plot against Parliament tried to curry favor by telling authorities he could lead them to Father Oldcorne. Finally on the fourth day, hunger forced Brother Ashley and his companion, Bro. Owen, to leave their hiding place. Four more days later the two priests emerged weak and ill from their hiding place. All four were imprisoned in the Tower of London.

When efforts to spy on the conversation between the prisoners failed to yield any damning evidence, Oldcorne was tortured on the rack five hours a day for five consecutive days. He refused to say anything. When Oldcorne and Ashley were put on trial, the Jesuit priest denied the charge of being involved in the Gunpowder Plot so well that the charge against him was changed to simply being a Jesuit priest. He was found guilty of high treason and ordered to be executed. Just before he was hung, his betrayer asked for pardon, which Oldcorne readily granted; the Jesuit also prayed for the king and royal family, for his accusers, the judge and the jury who had condemned him. He was pushed from the ladder but was cut down before he was dead; he was then beheaded and quartered. Brother Ashley followed him to the gallows.