The dishonest steward: administrator of injustice?

On September 22nd, in a beautiful church in downtown Lucerne, Fr. Arturo Sosa presided over the sacrament of the Eucharist surrounded by brother Jesuits and laypeople who share the mission of the Society of Jesus. The choir and orchestra, comprised of some fifty musicians, had chosen the “Missa palatina”, composed by Swiss Jesuit missionary Fr. Martin Schmid. The mass, created by Schmid in the 18th century during his ministry in the Bolivian Reductions, was sung wholeheartedly, filling the church, and inviting the assembly to consider how their celebration was connected to similar celebrations on the other side of the planet, hundreds of years ago. In much the same way, in his homily (see the text below), Father General invited the congregation to listen to the Gospel from a new angle, to consider what it might mean to us that Jesus seems to praise a dishonest administrator. 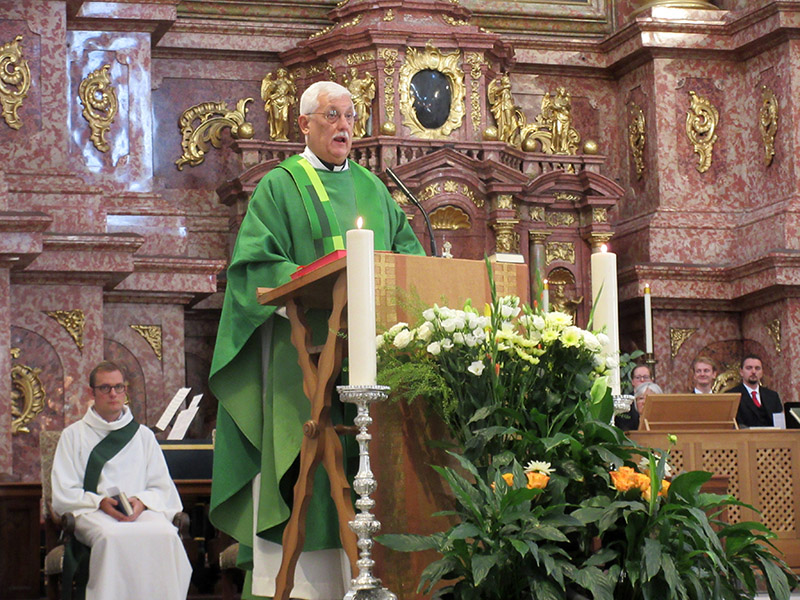 The parable that we have just heard disconcerts us a little.

When the Master announces the removal from office of an administrator who has been accused of wasting his goods, this is in line with our sense of justice.

However, when we hear that the “The master commended the dishonest steward for his shrewdness” (Lk. 16:8), our sense of justice protests.

How could Jesus say something like that? Why should dishonesty be called wise conduct worthy of praise and even held up as an example?

Let’s take a look at the charges first. The steward is accused of wasting his master’s goods. This is a very general accusation which does not tell us much about what actually happened. It is important to recall, however, that today’s Gospel passage is located immediately after the parable of the prodigal son, about whom exactly the same sentence is said: “the younger son gathered all he had and took a journey into a far country, and there he wasted his property in reckless living (Lk. 15:13).

What really happened to the goods, how they were spent or used is not so important. What really matters is that the administrator did not act according to the will of his master. Like the prodigal son, he had moved away from his master, even if he had apparently never departed.

Again, we have a resemblance between the prodigal son and our administrator. When the first one had run out of means of subsistence, he reflected and found that returning to his father, even if he was no longer worthy to be called his son, would be the best thing he could do.

The dishonest administrator also reflects asking himself “What shall I do”?

Like the prodigal son, he wants to improve his future. The focus of his attention is on other people and his relationships with them. It is in them that he sees a chance for himself. And that is why he is praised by his master. Not for wasting goods before. The Master praised the wise steward who began to donate. His wisdom is precisely to begin a new type of relationship, that of gift. And he himself becomes more and more like God, who always gives.

The commended steward is not therefore dishonest. He wisely manages a situation of injustice. The translations that speak of “the administrator of injustice” more faithfully reflect both the Greek text itself and its meaning.

If we now apply this parable to ourselves, we can see that here on earth we are all stewards of injustice, that is, of goods accumulated against the will of the Father who wants them distributed. In reality, we believers are sinners like others. But we have believed in the love that God has for us, and we have experienced the mercy of the Father. So we are all invited to experience the same transformation from administrators of injustice to wise administrators who know how to introduce the logic of gift. Often our efforts will not change the world. But in this world as it is, we must live with evangelical wisdom, reversing the insipid tendency to accumulation, like the one the prophet Amos speaks of today, into that of gift. Thus we become more similar to our Father who is in heaven.

Let us therefore ask for all of us not to take possession of the goods of this world, but to use them to the benefit of the brothers and sisters.

Share this Post:
Jesuit education at the margins: it works!
Geneva, an international city – The Jesuits are there
Posted by Communications Office - Editor in Curia Generalizia

First World Day for Grandparents and the Elderly: Memory and Presence

A gift from Canada for the Ignatian Year

First World Day for Grandparents and the Elderly: Memory and Presence