IgnAN: the strength of an Ignatian network

In his presentation to the Major Superiors of Europe gathered in Drongen (Belgium), Regional Superior Marc DeSmet assessed the situation frankly. The Jesuits in the Netherlands and Flanders (the ELC Region - European Low Countries) are few and ageing. But he did not say this with tears or with a defeatist spirit. Why not? In large part because his Region is animated by IgnAN, the Ignatian Apostolic Network. It is by means of this Network that the ELC has chosen to ensure a real and effective involvement of the laity in the Jesuit works and activities of the Region. We met the coordinator of the Network, Cecilia Vanneste.

The initiative was born in 2007, she told us, when the Provincial at the time brought together the directors of all the Ignatian works and movements. Until then, these people did not know one another at all: they were all running their own operations. Cecilia was at that time president of CLC Flanders. Meetings started to take place twice a year, a steering committee was formed, and Jesuits and lay leaders visited one another regularly. When it became clear that a dedicated person was needed to coordinate this new Network, Cecilia, who for thirty years had been living in an Ignatian milieu, was chosen.

Her approach was simple and clear: she toured all the works and asked the basic question: “As an Ignatian work linked to the Society of Jesus, what are your needs?” The answer was equally simple and clear: “Formation for our collaborators, more Jesuits, more money!” 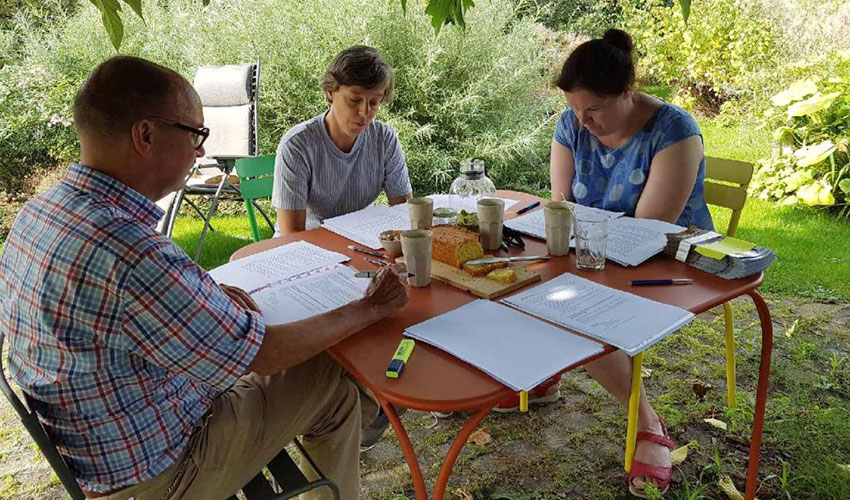 “Regarding formation,” she explained, “I drew inspiration from ‘Partners in Mission.’ the Jesuit formation programme being developed jointly by the Jesuit Provinces of Ireland and Great Britain. Specifically, we offered training days that brought all the collaborators together. Not only were they happy with what they were learning, but the sessions gave rise to greater mutual knowledge that has borne much fruit ever since. The importance of these meetings was confirmed to me when one of the participants wrote: ‘This day was important for me, not only for the sake of my work, but also for myself personally, for me as a husband, for me as a father’. We later extended these Ignatian formation days to members of the boards of directors of the various works.”

To meet the need for more money, Cecilia has taken university courses on fundraising, and the Network is supporting the initiatives of the works themselves in this area. As regards the need for more Jesuits, she has proposed setting up a team made up of two Jesuits and two lay people instead of having just a single vocation promoter. This group has brought together the various apostolic works that are in contact with young adults: it is called JOIN, the Ignatian Youth Network.

The IgnAN network believes that it can play a significant role for young people in the secularised context of Flanders. These are hard times for many of them: the first task is to listen to the young people and try to reach them in the digital world. More and more people are following the “Pray as you go” podcasts, and many are also taking part in the Advent and Lenten retreats (over 20,000 registered last time). After that experience, some young people joined a CLC or made a retreat at a retreat house.

The success story of lay-Jesuit relations in the ELC Region is built largely on interpersonal relationships. “Lay people and Jesuits get to know each other and can communicate with each other at any time. Those in charge of the works support one another both in practical matters and in other types of collaborations, such as bringing the JRS (Jesuit Refugee Service) to the schools or dedicating a part of the Oude Abdij Spiritual Centre to space for a secondary school in Ghent.”

When Cecilia Vanneste was asked whether she had any suggestions to offer to other Jesuit Provinces on the relationship between Jesuits and lay people, she answered: “I would simply suggest bringing people together, Jesuits and partners, and letting them dream about what is possible. Let them listen to one another and identify needs. In the past lay people were formed by their daily contact with Jesuits, but now there are few Jesuits in the institutions, so we really need to offer formation on St Ignatius, on the Society of Jesus at a universal level, on discernment, and on the Universal Apostolic Preferences. CLC members in our Region can and do accompany this formation programme.”

JCEP
Share this Post:
The Egied Van Broeckhoven School, a new educational and social project in Molenbeek
Creating something ‘new’ in the ‘Old Abbey’ in Drongen
Posted by Communications Office - Editor in Curia Generalizia

The “Maison Saint Ignace” in Marseille, a “refoundation” of the Jesuit presence

The Youth “out into the deep” at the Marseille Gathering