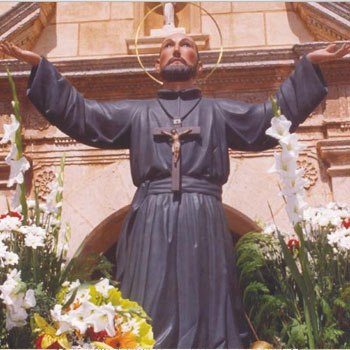 Alphonsus Pacheco (1549-1593) desired to go to the Far East missions for many years before he was suddenly assigned to the Goa mission when one of the men recruited by famed missioner, Father Alexandro Valignano became sick; Father Pacheco was missioned in his place. Born of one of the old families of Castile, Pacheco entered the Society in 1567 and was at Alcalá when Valignano came recruiting men for the missions. Pacheco arrived in Goa in September 1574, and served first as assistant to the rector of the college and then as assistant to the provincial. He returned once to Europe to recruit new missionaries, and then became superior of the Salsette mission upon his return. He was replaced shortly before his death by Acquaviva who led the Jesuits when they went to Cuncolim.