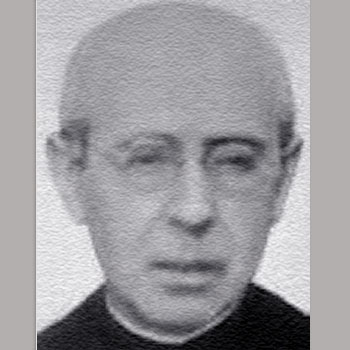 Constantino Carbonell (1866-1936) was one of 11 Jesuits killed at the start of the Spanish Civil War in 1936. Although the Spanish revolutionary government had surpressed the Society of Jesus in 1932, a few Jesuits refused to go into exile. These martyrs were all killed between Aug. 19 and Dec 29, 1936.

Only a week after the civil war began, authorities came at night to the apartment that Sitjar shared with Brother Gelabert and arrested the priest. Gelabert barely escaped through a window. By the next morning Father Carbonell, Brother Raymond Grimaltos and Gelabert joined the superior in a school that had been converted into a prison. Carbonell had served as superior of the Jesuits in Alicante, and minister of several different communities. Gelabert spent his life serving as a gardener.

The Jesuits were able to receive visitors, who brought mattresses and food, but their wait for the inevitable soon ended. Shortly after midnight on Aug. 19, Sitjar was told he was going to be set free; instead he was taken to a road outside the city and executed beneath an olive tree at 3:00 a.m. His three companions died four days later when authorities took them to an olive grove outside of town on the road to Valencia and shot them as well.