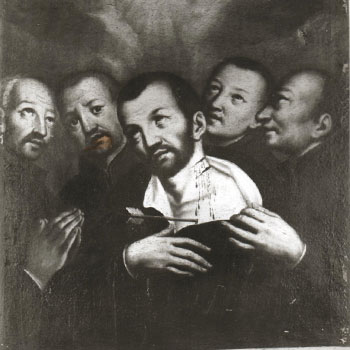 Francisco Aranha (1551-1583) was born in Portugal, probably in Braga. He traveled to Goa where his uncle had been Goa's first archbishop and entered the Society of Jesus as a brother on Nov. 1, 1571. His first two assignments were at the colleges in Cochin and Goa. About 1577 he was assigned to the Salsette mission where he devoted himself to building churches and chapels. When the five Jesuits were attacked outside of Cuncolim, Brother Aranha was the second to be struck. Villagers cut his neck with a saber and thrust a spear into his side and left him for dead. He managed to drag himself into the woods where people found him and attacked him further, still without killing him. Finally he was forced to stand up before an idol but refused to bow before it. An ax blow ended his suffering.