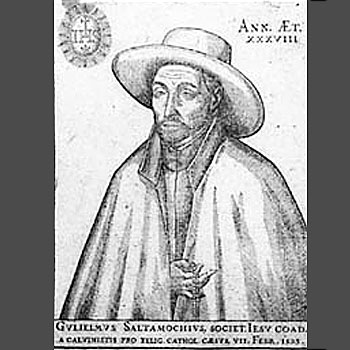 Brother William Saultemouche (1557-1593) served as porter at Pont-à-Mousson and was known for his simplicity and gentle character. He was chosen to accompany Father Jacques Salés on a mission to give sermons in Aubenas, a town that the Catholics had regained control of from the Huguenots. The baron of Montréal wanted someone who could refute the Calvinist ministers who were becoming more bold in their attacks on Catholics. Salés opened his sermons in Aubenas on Nov. 29, explaining Catholic belief without insulting or denigrating the Protestants. He moved on to other towns in the area after he finished in Aubenas, but then returned with Saultemouche on Feb. 5, 1593 because the tension between Catholics and Huguenots was growing more serious.

For more details of Saultemouche’s martyrdom, see the account under the name of Blessed Jacques Salès.