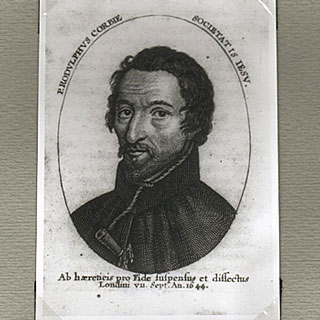 Ralph Corby (1598-1644) enjoyed a relatively long time of ministry in England. His parents were converts to Catholicism who moved from England's County Durham to Ireland, returned to England and then settled in Flanders where Corby studied at the English College; he continued his preparation for the priesthood in Spain and then entered the Society of Jesus after he was ordained in 1625. When he finished his Jesuit formation, he was sent in 1631 or 1632 to the English mission.

He returned to County Durham where there were few priests. For 12 years he confirmed Catholics in their faith and administered the sacraments to them. He was arrested July 8, 1644 while celebrating Mass at Hamsterly Hall, near Newcastle. Puritan soldiers broke into the house just as he was about to read the Epistle. Corby readily signed a confession admitting he was a priest and was put on a ship for London. Jailed in Newgate Prison, he went to trial on Sept. 4 at Old Bailey. With his earlier confession the trial was a formality and he was found guilty of high treason and sentenced to death. Three days later he was hung until dead, then disemboweled and quartered, but the sheriff order his body and cassock to be burned so that no one could collect any relics.