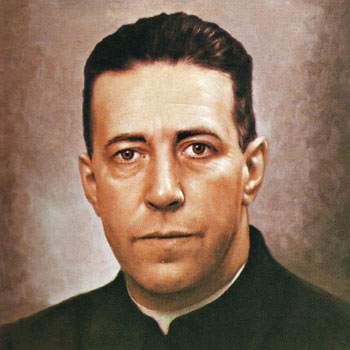 Alberto Hurtado Cruchaga (1901-1952) is famous as a pioneer in the Latin American Church’s activities in favor of the working poor. The founder of El Hogar de Cristo directly experienced poverty as a young man when his mother was forced to sell the family farm after his father’s death. However, a scholarship allowed Hurtado to study at the Jesuit school in Santiago. He joined the Jesuits in 1923 but the Spanish government dissolved the Society of Jesus in 1932 while Hurtado was studying theology; the young Chilean finished his studies in Belgium where he was ordained. On returning to Chile, Hurtado exercised a typical Jesuit ministry of teaching and giving retreats.

His concern for the poor eventually led him to become director of Catholic Action, and in 1944 to ask women on a retreat to think of the men, women and children who were without a home to live in. The women responded with donations which Hurtado used to open first a hospice for youth and then one for women and children. This was the beginning of El Hogar de Cristo. "Hogar" means home, and the name signifies that people were welcomed into Christ's home. The movement spread beyond Chile and throughout South America. In 1947 he founded Asociación Sindical Chilena, a trade union movement. Hurtado also wrote three books on social issues and in 1951 started a monthly magazine, Mensaje ("Message") that explains the Church's social teaching and addresses social issues.