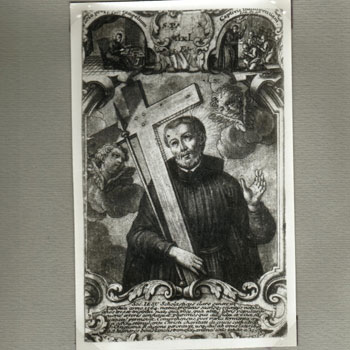 Saints Paul Miki (Paulus Miki, 1564-1597), Soan John de Goto and James Kisai were the first of a long line of Jesuits who gave their lives in a literal imitation of their crucified Lord. Miki was also the first Japanese religious to be martyred.

The initial growth of Christianity after Francis Xavier's 1549 arrival in Japan led to opposition from Japanese leaders who feared that the introduction of Christianity was the first step in Spain's effort to conquer their country, just as the Spanish had already conquered the Philippines. Japan's ruler, Toyotomi Hideyoshi, banished all foreign ministers in 1587, but the decree was not rigidly implemented and Jesuits were able to continue their work under the threat of persecution. Remarks made in 1596 by the captain of a shipwrecked Spanish ship led Hideyoshi to order the arrest of all Franciscans who had come to Japan from the Philippines three years earlier. Along with the Franciscans, police arrested the Jesuits Paul Miki, a scholastic, and James Kisai, a brother, and John de Goto, a catechist who was in the process of entering the Society.

Miki came from an affluent family near Osaka and became a Christian when his whole family converted. He entered the Jesuit-run seminary in Azuchi when he was 20 and then joined the Society two years later. He was an eloquent speaker who was very successful in drawing Buddhists to Christian faith. He was only a few months from being ordained when he was arrested. James Kisai just happened to be in the same community when the police arrived. Although a Buddhist bonze educated him, Kisai was later baptized and married a woman who had also converted. She subsequently returned to Buddhism, leaving him with a son. Kisai entrusted the child to a Christian family and then moved to Osaka where he worked for the Jesuits as porter and house servant. The Jesuits eventually made him a catechist when they recognized the strength of his faith. He joined the Jesuits as a brother, probably in 1596.

John de Goto, on the other hand, was born of Christian parents on one of the islands of the Goto archipelago, but moved to Nagasaki to have freedom to practice his religion after authorities on the island began persecuting Christians. He was living in the Jesuit community in Osaka and working as a catechist while attempting to join the Society. De Goto, Kisai and Miki were arrested on Dec. 9 and then taken to Miyako (today's Kyoto) where they were imprisoned along with six Franciscans and 15 tertiaries. The 24 prisoners were taken into the public square and condemned to be executed by crucifixion; as a mark of shame, the lobe of each man's left ear was cut off before they were led away. The prisoners left the following day for a month-long walk to Nagasaki where they would be killed. Along the way people insulted and mocked them, but Miki and a Franciscan priest preached to the crowds anyway. Just before they reached Nagasaki, two Jesuit priests were able to minister to the prisoners. One of them, Father Pasio, took the three young Jesuits into the chapel where Paul Miki renewed his vows and John de Goto and James Kisai pronounced their first vows.

That same morning the prisoners were taken to a hill outside the city where they saw crosses lying on the ground waiting for them. They sang a Te Deum, the traditional song of thanksgiving, when they saw how they were to die. Then they allowed the executioners to tie them onto the crosses and fasten metal bands around their necks so they would keep their heads erect. The crosses were lifted up and dropped into holes in the ground. De Goto's father was in the crowd and heard Paul Miki preach to the people inviting them to conversion. Finally soldiers pierced each prisoner's chest with a lance. The hill on which they died became known as " Martyrs' Hill. "