“The first evening, after he had arrived from the airport I gazed at Father General sitting relaxed as if he had always been here, a member of the community. I did not feel as if he was someone who came from Rome, from the Curia, who was passing through. He was at home. He is a man who, according to the Constitutions, is available to go everywhere where need be.”

These were the words of one of the Jesuits who joined Fr. Arturo Sosa for Holy Week celebrations during Fr. General’s official visitation to West Africa. When Fr. General visits a province, it is important that he experiences life, community, prayer and work in the same way as the Jesuits that he is visiting. In seeing the world through the eyes of his brothers, the General is able to better discern the needs and abilities of the worldwide Society of Jesus, and to guide the mission of the Jesuits under his care. It was fitting then that Fr. General started this Easter visitation in Chad, the first Jesuit mission of the West Africa Province. 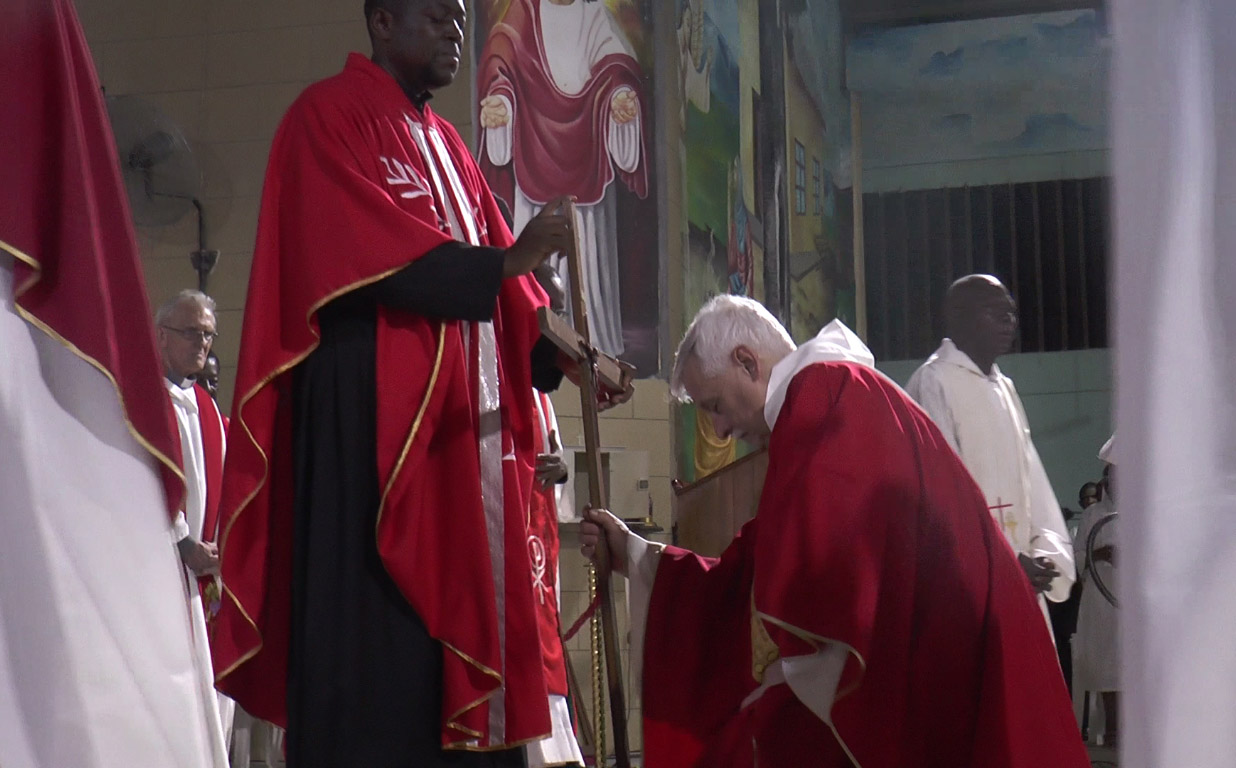 Fr. General started his Triduum with Fr. Hyacinthe Loua, Provincial of West Africa, for the Holy Thursday washing of feet at the St. Mathias Mulumba Parish in N’Djamena. The homilist, Jesuit Father Ludovic Lado, connected the powerful imagery of Frs. General and Provincial washing feet to the example of Pope Francis, “as we saw him bend over to kiss the feet of South Sudanese political leaders and beg them to make peace.”

Upon arrival in Douala, Cameroon, on Good Friday, Father General proceeded to the Jesuit parish Our Lady of the Annunciation (OLAP). Father Mathieu Ndomba’s homily offered two lessons from the Passion: the link between suffering and human experience as an opportunity to deepen communion with God, and a reminder of the meaning of the death of Jesus Christ being defined by infinite love. 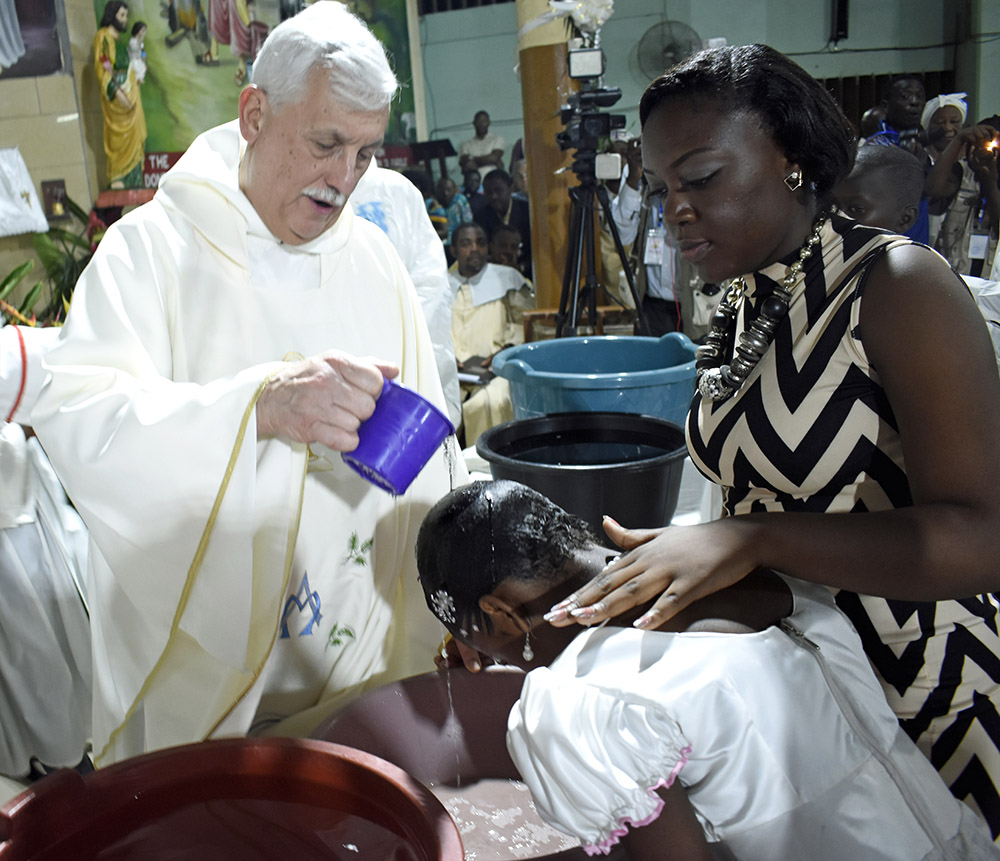 The Good Friday liturgy included prostration, the reading of the Passion, the lamentation interpreted in a traditional Bamileke manner, and the veneration of the cross. In an interview after the liturgy Fr. Sosa, speaking about reconciliation, said, “One of the moving moments in the Good Friday celebration was the lamentation. In my mind and heart, I heard so many mothers in this world who are crying for their sons as Mary did. This is the world we are sent to with a message of reconciliation and justice.”

On Holy Saturday, Father General joined the faithful of OLAP for the Easter Vigil Ceremony. He prayed along with the Christian community, baptizing and anointing catechumens. The entire celebration was framed by a traditional chant of thanksgiving in honor and praise of the Risen Lord. 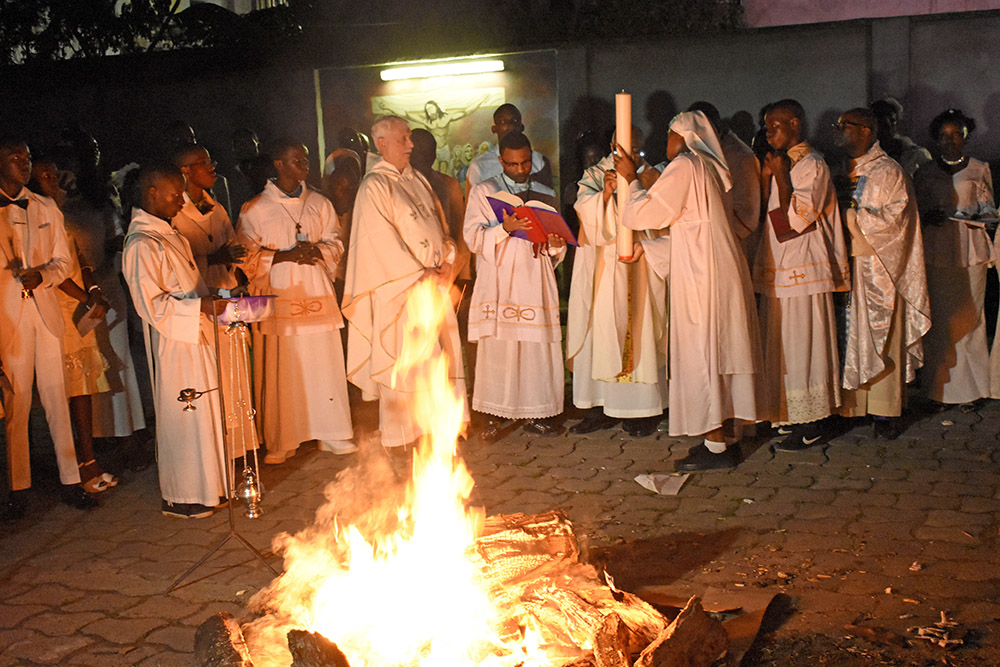 On Easter Sunday morning, Father General presided over the Solemnity of the Lord’s Resurrection in the courtyard of the Provincial Curia. Addressing the congregation on this solemn feast of the Resurrection, Fr. Arturo Sosa said; “In God we live and move and have our being as scriptures says. May we keep this quality of life constantly renewed!”

Watch the video of Father General in the West Africa Province.

Share this Post:
The Martyrs of Sri Lanka
The Apostolic Preferences energize the Bishop of Inongo
Posted by Communications Office - Editor in Curia Generalizia