The Apostolic Preferences energize the Bishop of Inongo 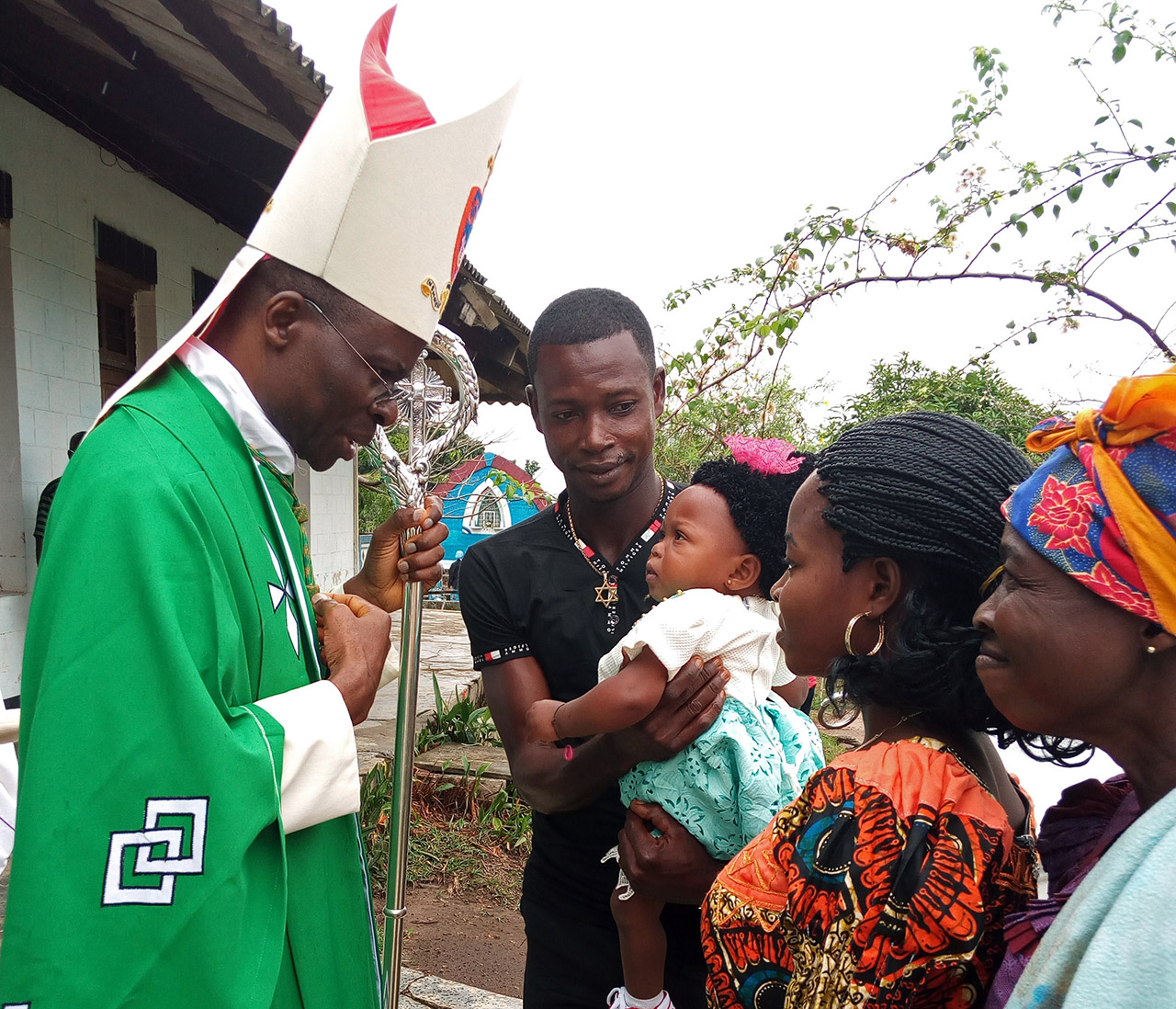 During Fr. General’s visit to West Africa, Fr. Pierre Bélanger SJ of the Jesuit Curia Communications team took the opportunity to interview Bishop Donat Bafuidinsoni SJ, the only Jesuit bishop in the Democratic Republic of Congo.

During our visit to Kinshasa, we met with Bishop Donat Bafuidinsoni, SJ. He has been Bishop of Inongo for less than a year and admits that he still has much to learn from this territory of more than one million inhabitants, most of them Catholic, spread over 23 isolated parishes. It is a region of dense tropical forest where roads are practically non-existent. Two large rivers, tributaries of the Congo River, and lake Maï-Ndombe cross the territory and act as the primary transportation routes.

The diocese, though large in acreage, is sparsely staffed. More than 100,000 square kilometers are served by about sixty priests, a limited number of men and women religious, and a dedicated corps of “pastoral assistants” who serve remote communities, often by pirogue or on foot.

That a Jesuit bishop was sent to Inongo by Pope Francis is a historical event worth noting. The Society of Jesus sent the first missionaries in the region, but they quickly came into conflict with settlers who sought to enslave the local populations for forestry or rubber harvesting. The settlers, wanting slavery to improve their profits, rightly feared that the Jesuits would denounce their forced labor policies and awaken people’s consciousness as to the moral bankruptcy of slavery. 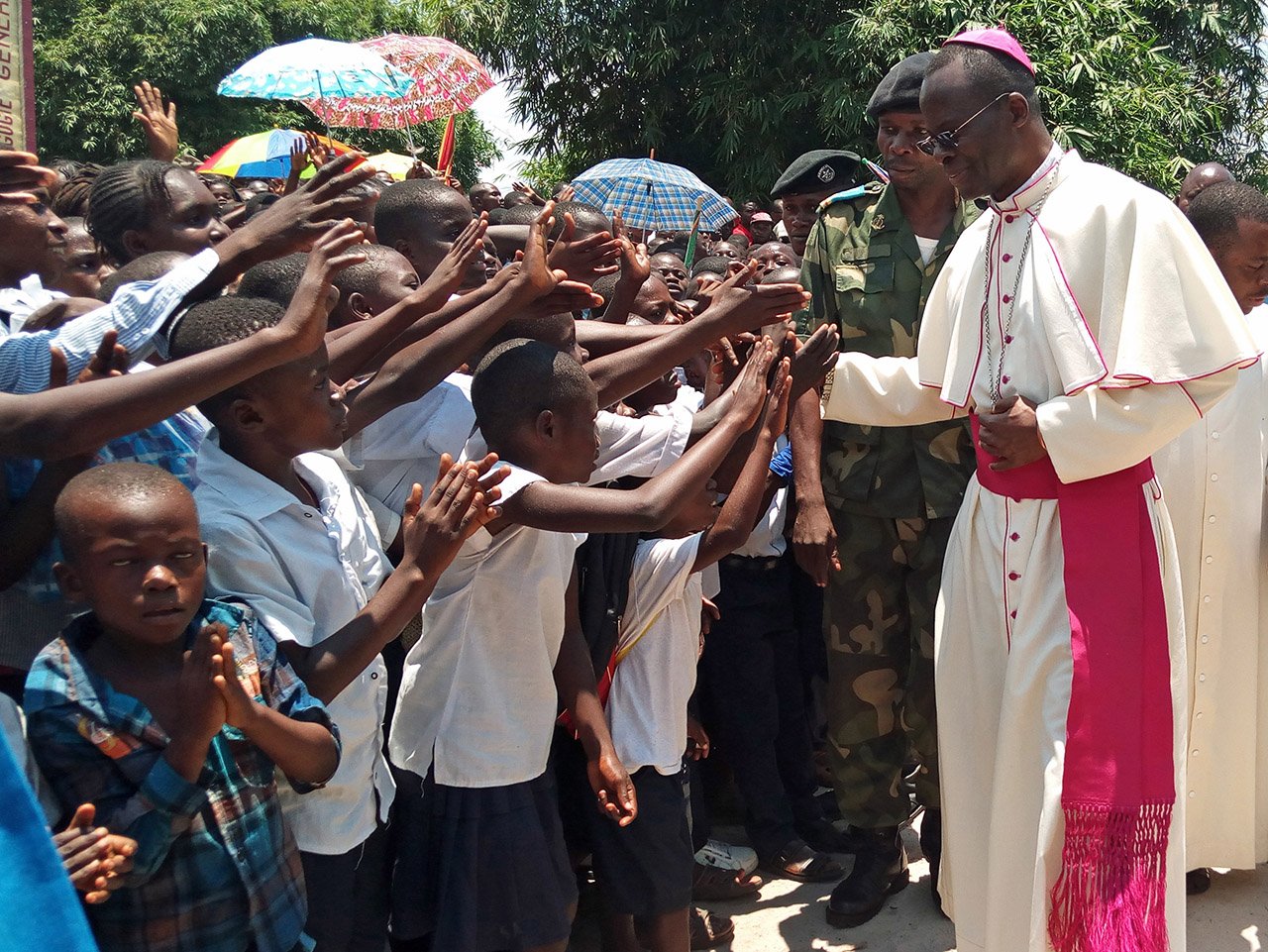 When asked what the greatest contemporary challenge was for his diocese Bishop Donat quickly answered ‘health services’ as the primary challenge since it is impossible to improve the lives entrusted to him without health care. The second challenge according to the bishop is education, especially when considering that most schools in the area are in poor condition and teacher training is lacking. Speaking more generally, Bishop Donat mentioned the environmental challenges that confront his flock on a daily basis. By example, the bishop called attention to the fact that there is an abundance of water in the region, but no clean or running water for his congregation, or to the rampant logging and forest clearing that leaves devastated lands that quickly become unable to support communities that have existed for generations.

In this context, Bishop Donat welcomed with joy the promulgation of the Universal Apostolic Preferences of the Society of Jesus. The preferences give him strength and courage both to value spiritual reflection and the promotion of the Spiritual Exercises, to make room for the marginalized, to open paths to the future for the young and to give them the opportunity to return to their communities once trained, to fight with others against what harms nature's development.

At the end of the interview, Bishop Donat concluded, “together we can do good. We shouldn’t see all of this as a pessimistic picture. There is hope. The Christian is a man of hope; he cannot give up in the face of challenges. We will work, with each other and with the help of the Lord, because He knows that in Inongo as well, His people are there.”

The heart on the horizon

The Egied Van Broeckhoven School, a new educational and social project in Molenbeek

One year since Fratelli tutti: learning to live authentically

The Major Superiors of Europe and the Middle East meet “for real”!