Good morning to you all. I am delighted to be here with you to share some of my ideas about leadership and discernment and also to learn from you. You are an experienced group already - some of you with more experience than I have as Superiors general! We are all learning together.

As you know, discernment is a word we all use frequently. Pope Francis uses the word in almost every speech he makes... and he calls us to do it.

The rediscovery of the discernment process and of discernment as a way of life began in the 60s, 70s and 80s when, at least in the Society of Jesus, there was a rediscovery of a personal and individual approach to the Spiritual Exercises. Before that time the Exercises were given in large groups. The Retreat Master would sit at the top of a room and make an hour-long discourse - one in the morning, one in the afternoon and perhaps, even, one in the evening. People would go away and do their best to make sense of it; wrestle with the ideas, although with no individual guidance. That all changed in the 70s and 80s. The recovery of a personal accompaniment; the stress on the Spirit of God working in each person; building linkages with psychology; the discovery of the importance of an integration of human with the spiritual.

So discernment is now popular, à la mode as the French say. But the trouble is that now there are probably as many understandings of discernment as there are Catholics walking around the globe! We each interpret it in our own way. It is even used more in secular contexts. We hear people saying in shops “I have to think about this pair of shoes - whether they suit me or not. Let me take a minute or two to discern.” In some ways that is good, but in other ways it is a bit ridiculous. Familiarity is good but it can breed contempt. Words that were powerful lose their force. We have to fight that.

Discerning together - a new frontier

Discernment can make a huge difference when people live it as individuals. We have seen that in the last 30-40 years. But it can also make a difference at group level. This has not been so obvious in the last decades and this is where our real growth point can be. This is where the Spirit is calling us. We have a big opportunity. If we learn to discern together it can give us a new way of being. Pope Francis is showing us the way when in each synod he insists on stopping after every four interventions and leaving a time of silence. It is a way of saying: this whole project of Church is not about us and our opinions; it is the Spirit of God who is the real mover. Personally I think this is why Pope Francis can be unperturbed by the politics and the arguments. He knows that we have to go below those levels, those categories of right and left, conservative and liberal. We have to go deeper, below ideologies, to where the Spirit is at work. And we have to let that Spirit do the work. 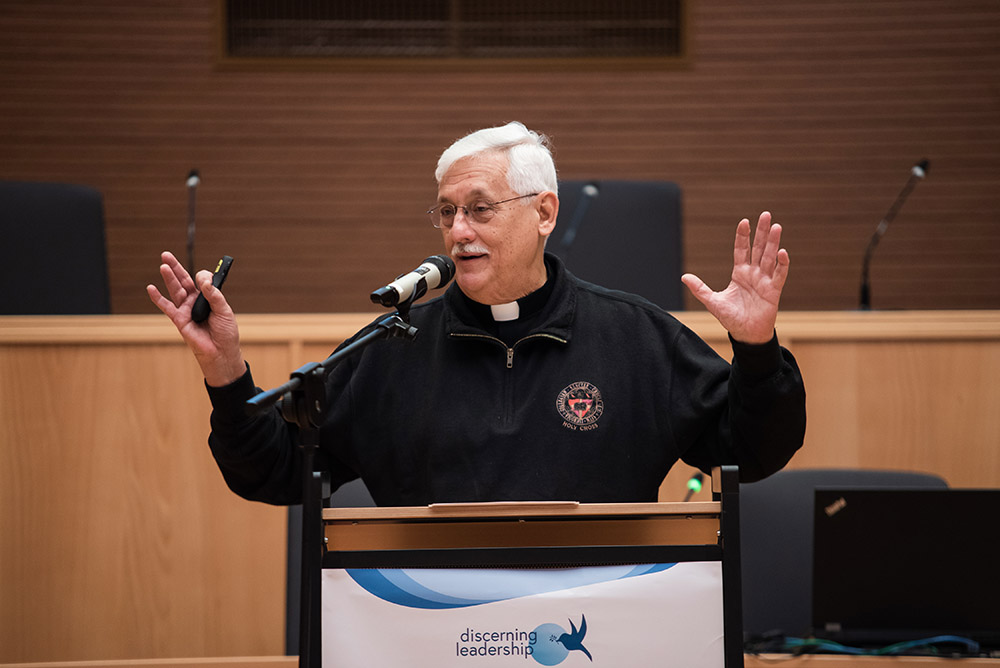 Of course discernment of any kind is not easy. At individual level we know that. How to interpret our own movements of spirit, to test the spirits, to separate the wheat from the chaff, the promptings that lead to life and those that are death dealing. As we all know, we need good and wise spiritual accompaniment. That has been the wisdom from earliest times, from the early Church fathers. And if that is the case for individual discernment how much more so for groups. So, can it be done? Certainly mistakes have been made and there is a fair degree of scepticism. You hear some say: “Well, discernment happens all the time. We are Christians and we have the Spirit and we are always discerning. No need to make a fuss.” Others take the opposite view and say “True discernment that it never happens. The conditions are too difficult: amazing freedom; total transparency; lots of time for prayer; people who are saints”. Other problems are that there have been experiences where the issue at stake was not serious enough and discernment in common was trivialised. At the other end of the spectrum it was tried for difficult decisions, but it seemed to take so long that Major Superiors and those making decisions felt that it just was not practical. Can we avoid these extremes, learn from mistakes, launch again into the deep?

However, there is a middle way, which I want to present, now, which we have been rediscovering in the Society of Jesus, especially since our last General Congregation. Like those of you here who lead other Congregations and orders, we have said many things since Vatican 2 and we have redefined or better said, rediscovered our mission. We have articulated that we want to work in an inter-religious way, we want to walk with the poor; we want to serve faith with creativity and depth; we want to work with the young. All of these were said. In that 2016 congregation, at a certain stage we found ourselves blocked. We were discussing ideas, dissecting documents. We had reached an impasse. And then there emerged the desire, the necessity to go back to our roots, to trust the Spirit rather than our own ideas, to engage in spiritual conversation, to risk ‘wasting time’ in prayer and group work.

With humility and after a certain amount of frustration, we realised we needed to find ways to listen to the Spirit. We realised that our mission is not a closed thing that we can define or grasp. We have not answered all the questions - we never will have. We need always to leave a gap where the Spirit has to enter and surprise us.

How to leave that little gap is the issue. Most of us want to close gaps; sort out things; be efficient; have timelines and deadlines. We want everything under control. As you know from your own lives that does not work very well in individual prayer and it has not been working, either, in the discernment in common. There is really no surprise there. Leaving the gap for the Spirit; that was the first lesson. The second lesson of course was when we also realised that in any case it is not our mission. What a relief, what a burden lifted! Collaboration and networking became key words. The need to work with others, not because Jesuit numbers are less but because we are not in charge, God is. God leads the way; we follow. And that means we discern. We have to learn to discern. Just as Ignatius found that God treated him like a patient but firm schoolmaster, so too we are having that same experience at a communal level. Thank God our God is patient! We have been slow learners. 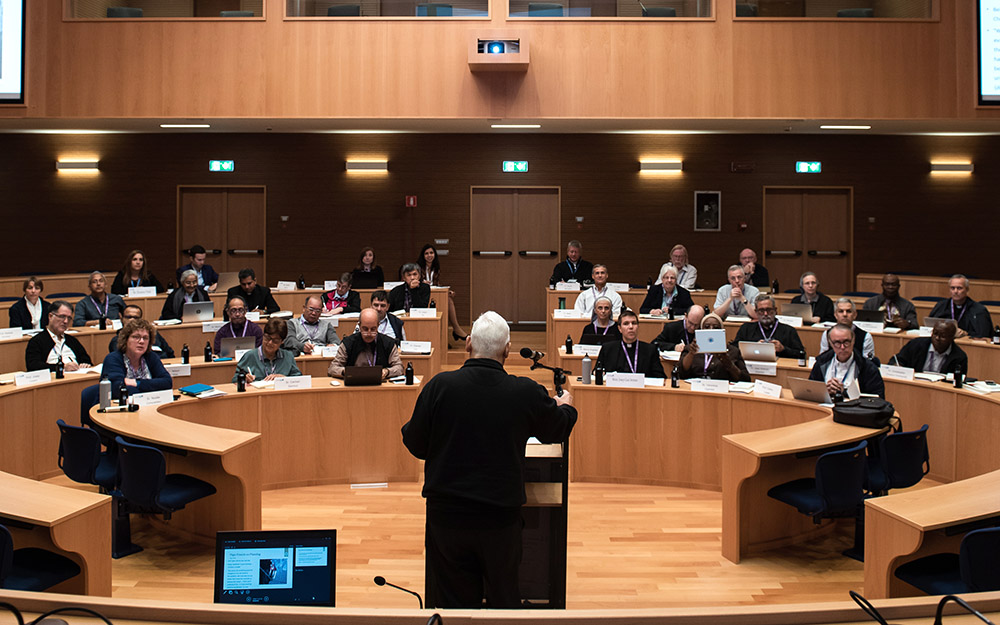 Steps in Discernment in Common

Let me move now from the lofty heights of discernment to the thin ice of apostolic planning. Discernment is the foundation. You cannot plan if you have not discerned. You cannot plan if you have not listened to the spirit. We are not an NGO or a business. We are the Society of Jesus, following Him. You are priests and religious and lay people also following Him both at personal and communal level.

The Pope has been critical of non-discerning ways of going about things. He spoke during this past summer of 2019 about a diocese in Italy which is very well organised. He said it had more employees than the Vatican. But you could see he did not feel that the flexibility of the Spirit was there. He talked about the need to be ready to be off balance, squilibrato. In fact he said that the Gospel is crazy teaching, that the beatitudes should get a Nobel prize for craziness. So, planning and having everything worked out in neat steps... the Pope is nervous of this kind of planning.

You can see he is really insisting on this openness to the Spirit - on being surprised; on not having everything tied up. Leaving space for the Spirit - not just us talking all of the time, but letting the whole process breathe - that is a key element of discernment in common.

We can’t plan unless we are praying and listening to the Spirit, and that has to lead to action and putting things into practice, on incarnating what we have discerned. We are a faith based on the Incarnation. Everything is put into practice in the real, practical world in places, times and spaces. 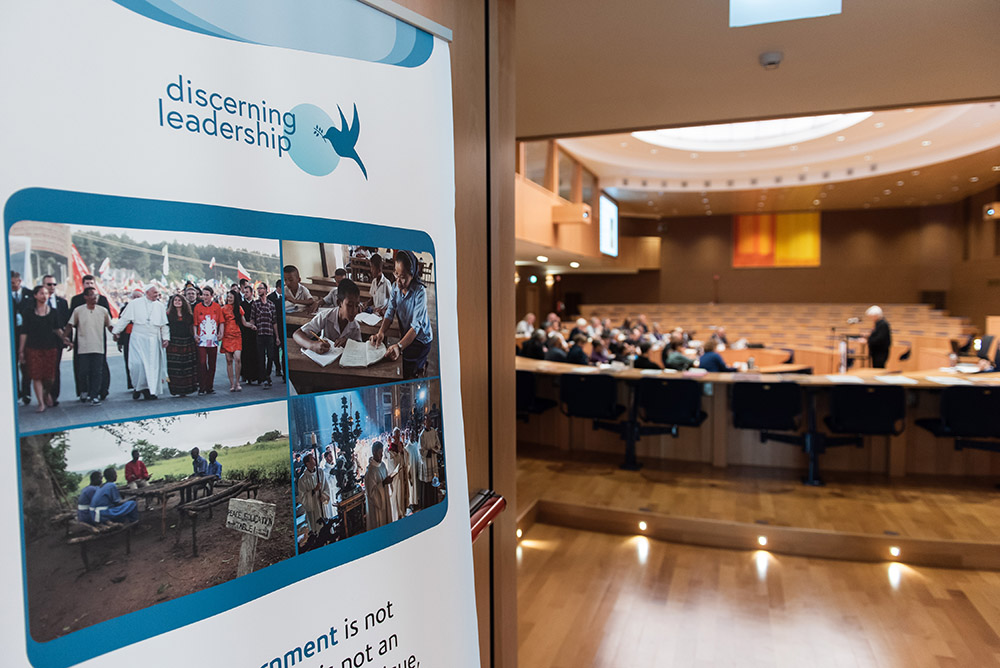 When we discerned the apostolic preferences between 2017 and early 2019, we embarked on a risky process. I did not know where we would end up and I am still being surprised. The initial process engaged people from the grassroots. Then earlier this year we had 8 days here in Rome with my enlarged council of 25. Reports had come in of the discernments carried out locally. They were amazingly convergent. So much so that some of the council said: why are we spending 8 days, all this is obvious. In the end we needed 8 days. We needed to listen to each other and to the Spirit, to feel His gentle breeze renewing the face of the Society. Now we are discerning how to implement and move forward, avoiding the temptation to rush…or to delay, trying to listen. We are finding always the need to be converted, to be humble.

So, what are the conclusions, what is my advice? If I may, I offer in all humility, a few pieces of advice to you as leaders:

As I mentioned, our Jesuit recent renewal moment started with that blocked moment in our General Congregation, a moment of humility, of failure even. Out of that we found the desire to start again the road of our first companions, discerning together, trusting each other and our lay, religious and diocesan partners, training people and learning from them about new discernment methodologies; adapting spiritual conversation to groups of half believers or non believers.

Let us profit from each others’ experience this week. We want to travel the road of the future Church together, in solidarity, more united. It can be done because we know and we believe that the Spirit of God is working in the world, struggling at times; but always there; always calling us forward.

So, what is discernment and what is discernment in common. Fundamentally it is nourished and fed by our desire and our passion and our longing to be with the Lord. It is as simple as that. We need humility. We are His witnesses, we preach His Gospel not our own. We are those who are called to bring the good news; to testify; to shine light into dark places in a humble way. We can do that by listening to the Spirit; by being very in tune and sensitive... and then by being absolutely determined to put into practice what the Spirit is saying. That is where discernment, planning and leadership all come together: when we hear the Word of God and put it into practice. Thank You.

Share this Post:
Father Arturo Sosa in Slovenia… and in pictures!
“The path to both of us”: for couples who want to grow
Posted by Communications Office - Editor in Curia Generalizia

Father General encourages prayers for the victims of COVID-19

Working for the Society of Jesus: to see the best face of the world