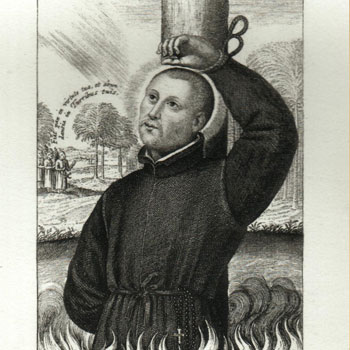 Father Balthasar de Torres (1563-1626) was born in Granada, Spain, and joined the Society in 1579 when he was only 16 years old. He studied in Goa and Macao and then taught in the seminary there after he was ordained a priest. In 1600 he arrived in Japan to begin 25 years of missionary work. He did not leave the country when the banishment order was published, but continued to perform his ministry in secret. He and his catechist, Michael Tozó, were captured in a small village near Nagasaki on March 20, 1626, and imprisoned in Omura.