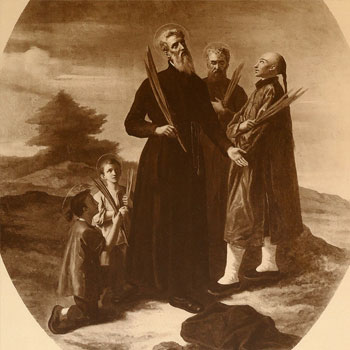 Camillus Costanzo (1571-1622) was a soldier and a law student before joining the Naples province of the Society of Jesus in 1591. A native of Calabria, southern Italy, he was sent to the China mission but the Portuguese prevented him from entering that country so he devoted his energy to Japan, where he learned the language quickly and gained many converts in and about the city of Sakai. When all missionaries were banished, he went to Macao for six years, devoting himself to studying Buddhist texts and writing pamphlets in Japanese. By the end of 1621 he was unable to stay away from Japan, despite the danger of returning. He disguised himself as a soldier, but the captain of the ship that took him back to Japan recognized him as a missionary. Nevertheless, he managed to elude capture and settled on Hirado Island in western Japan as his mission area. On April 24, 1622 he was arrested when an informer turned him into local governor. He was condemned to be burned at the stake.