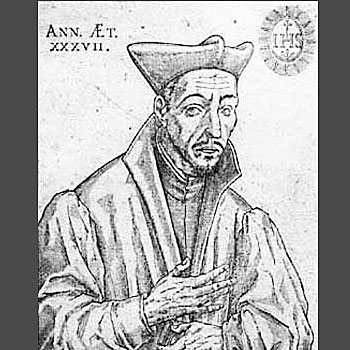 Jacques Salès and Guillaume Saultemouche were martyred for their defense of belief in the real presence in the Eucharist during a conflict with Huguenots during the height of France’s War of Religion. Jacques Salès (1556-1593) attended the Jesuit school at Billom from 1568-1572 and developed a strong devotion to our Lord in the Blessed Sacrament. He wanted to join the Jesuits, but felt that he was needed at home since he was his parents' only son. He moved to Paris to study at Clermont College and found his desire to join the Society stronger than ever. His father finally gave him permission and he entered the novitiate at Verdun in 1573.

His own studies led the young Jesuit to become a teacher of theology at Pont-à-Mousson in 1585. He wanted to be a missionary and wrote Father General Claudio Acquaviva to be accepted anywhere America, China or Japan. The response was negative; Father General reminded him that France itself was a mission territory, given the conflict between Catholics and Huguenots (French Calvinists). Father Salés determined to devote himself to confronting the errors of Huguenots. He remained teaching at the university, and gave some missions in nearby towns, including Metz which was a fervent center of Calvinism. Calvinists sometimes joined the Catholics at his lectures and tried to interrupt the Jesuit preacher by heckling him. Nevertheless, Salés was successful in confirming Catholics in their faith. In 1590 Salés was sent to Tournon to take the chair of ""controversial"" theology; he was responsible for devising a plan of studies to treat the theological issues that divided Catholics and Protestants, showing the truth of Catholicism and responding to the objections of the Protestants. He continued traveling around to give missions and wrote several booklets to aid people in understanding orthodox theology; one of these booklets explained the Eucharist.

His final mission came in 1593. The baron of Montréal had regularly requested a Jesuit to give the Advent and Lenten series of sermons in Aubenas, a town that the Catholics had regained control of from the Huguenots. The baron wanted someone who could refute the Calvinist ministers who were becoming more bold in their attacks on Catholics. Salés was picked for the mission; accompanying him was Brother William Saultemouche (1557-1593) who had served as porter at Pont-à-Mousson and was known for his simplicity and gentle character. Salés opened his sermons in Aubenas on Nov. 29, explaining Catholic belief without insulting or denigrating the Protestants. He moved on to other towns in the area after he finished in Aubenas, but then returned with Saultemouche on Feb. 5, 1593 because the tension between Catholics and Huguenots was growing more serious.

That evening the Jesuit teacher was visiting a Calvinist family when he heard the sound of a mob outside so he rushed to the Catholic church where he found Saultemouche. They prayed for awhile and then returned to their residence. Early the next morning three soldiers forced their way into the Jesuit residence and found the two Jesuits at prayer. They were taken to Huguenot headquarters and were examined by a few Calvinist ministers who tried unsuccessfully to get the Jesuits to deny their faith. Frustrated by Salés' intransigence, the minister in charge of the interrogation decided that the Jesuit priest must be killed. Soldiers took Salés outside where they met Saultemouche who insisted on accompanying his companion. In the square outside the headquarters, Salés was asked one last time to deny his belief in Christ's real presence in the Blessed Sacrament. When he refused, he was shot in the back and fell to the ground. A soldier then drove the bayonet of his rifle through his chest. Brother Saultemouche folded his arms around the priest and was stabbed by a sword until he too was dead. The Calvinists then had the bodies of the two Jesuits dragged through the streets of Aubenas. Six days later the bodies were dumped into the ruins of an old church which was used as a dump. That night two Catholics came and retrieved the bodies and buried them in a nearby garden.