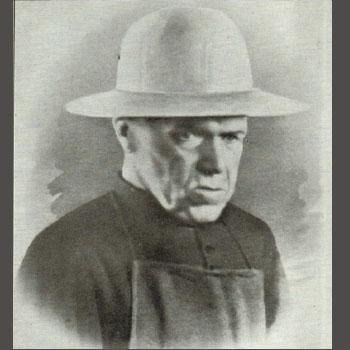 Jan Beyzym (1850-1912) was a true pioneer in caring for lepers at a time when no cure for leprosy was available and those afflicted with the disease were banished from society. Beyzym was born at Bayzymy Wielkie, Region of Volinia, in what today is the Ukraine. His early education took place at home on his family estate, but his parents had to separate after the family lost their estates in a political uprising in 1863.

After his secondary studies in Kiev, he entered the Society at the Stara Wiés Novitiate on Dec. 10, 1872. During his novitiate a cholera epidemic broke out, and Beyzym and a few other novices were permitted to accompany the priests and brothers as they visited people in nearby villages suffering from the illness. He completed philosophy and theology in Cracow and was ordained in 1881. His first apostolic mission was to work in the schools of Tarnopol and Chyrów, where he taught French and Russian and also was in charge of the school infirmary.

As early as 1879 he asked to work among lepers, and during his years of teaching, the desire to work with them only increased. After an exchange of letters with Father General Luis Martin, the 40-year old Jesuit finally received the assignment he had long desired. In 1898 he went to Madagascar, rather than India, because he was able to speak French and could assist the French Jesuits who worked with lepers.

Father Beyzym was assigned to the Ambahivuraka leprosarium on the outskirts of Tananarive in an abandoned desert area. One hundred and fifty patients lived in extreme material and spiritual poverty, decimated by hunger and sickness, without access to the most elementary medical care. Death came as often from hunger as from the illness. The first radical step that he took was to live with the lepers, something that no one else did. He also put his infirmary experience to work and began to provide medical attention to their sores. And he labored to improve their houses, prepare food and secure adequate water. The government ration of rice was inadequate, so he went into the city and begged food for them.

As much as he could do by himself, he soon realized that they needed a real hospital and doctors and nurses. The project was far too ambitious for the resources of the mission, but Beyzym would not give up. He placed the project under the protection of Our Lady of Czestochowa, and began soliciting funds from Catholic missionary organizations and magazines in Poland. His letters were eloquent and effective, and people who had little to spare donated what was needed to build a hospital. The Polish Jesuit picked a location at Marana, near Fianarantsoa, because it had a good water supply and the land was good for agriculture. He supervised the construction and even sculpted decorations for the chapel's interior. The hospital opened Aug. 16, 1916, staffed by Sisters of St. Joseph of Cluny; patients wore uniforms and formed a worshipping community. The lepers at Ambahivuraka surprised Fr. Beyzym when they arrived at the new hospital, 180 miles away, a month's difficult travel; they wanted to be with the priest who had shown them such love and acceptance.

The hospital stands today as a lasting monument to his dedication. He was a true pioneer at a time when no cure for leprosy was available and those afflicted with the disease were banished from society. He worked to change public attitudes, encouraged poor people to be generous with those who were even poorer, and built hospitals to take care of the sick and, above all, to give them back a sense of dignity and hope.

Beyzym died at Marana on Oct. 2, 1912. Both in his personal life and in his apostolic labors, he always kept before him the goal that Saint Ignatius prescribed for the members of the Society: the greater glory of God, and the good of souls. He wrote: “One’s country is where the greater service of God and help of the souls is found. It does not matter where you live: at the equator or at the North Pole. What really matters is to die in the service of the Lord Jesus as a member of our holy Society. I beg this grace as much as for our dear Province as for myself.