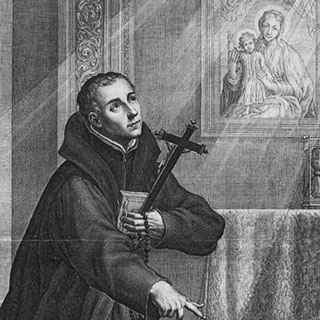 John Berchmans (1599-1621) personifies the ideal that ordinary deeds done extraordinarily well lead to great holiness. He died very young, only five years after entering the novitiate, but his great desire to be a priest inspired him to live religious life fully. He was born to a very religious family in Diest, Belgium, and started studies that would lead to the priesthood early in his life. He lived in the rectory of Notre Dame parish while he studied, but after three years his father told him he would have to leave school and learn a practical trade to help his family's poor finances. The pastor of the Diest Béguinage offered to pay for Berchmans' education in return for his service as a servant; in 1612 the young man took the same arrangement in Mechlin at the household of Canon Froymont. In Mechlin, though, Berchmans met the Jesuits and decided to join them rather than become a diocesan priest. His father was disappointed because a diocesan priest could contribute to the family while a Jesuit could not, but he gave his son permission to pursue his goal.

Berchmans entered the Jesuits in 1616 and performed all the novice duties with joy and exacting fidelity. He also sought to control himself through penances. A few months after he entered the Jesuits, his mother died; then his father gave up his shoemaking shop and entered the diocesan seminary. He was ordained a priest in April 1618. Later that year, on Sept. 25, John pronounced the three vows of religious life and went to Antwerp to study philosophy. After only three weeks he was informed that he would move to Rome for studies. Before he could return to Mechlin to say goodbye to his father, the latter died suddenly.

The young Jesuit arrived in Rome on Dec. 31 and joined the community at the Roman College, where he was as faithful to his studies and religious life as he had been in the novitiate. He excelled in his studies and at the end of his third year he was selected to defend the entire course of philosophy in a public disputation. His health had suffered from the effort he had put into studying for his final exam, and he became steadily weaker as he prepared for the public disputation, held on July 8. He hoped to rest when it was over, but he was also selected to represent the Roman College at another disputation to be held in August at the Greek College. The two events took too much out of his weakened condition.

On Aug. 7 he suffered an attack of dysentery, and then a fever set in. When the superior saw how pale and weak Berchmans was, he sent him to the infirmary. The young Jesuit grew more ill day by day as his lungs became inflamed and he grew weaker and weaker. He spoke of Paradise as if he would soon be there when other scholastics came to visit. The brother infirmarian suggested that he should receive Communion the next day, even though it was not a Sunday. The Jesuit community came in procession bringing Viaticum to the their dying brother. He asked for his crucifix, rosary and rule book and received a steady stream of visitors, including Father General. He spent his final night in prayer and died on August 13 in the morning.