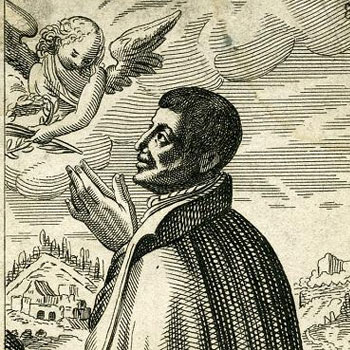 John Cornelius (1557-1594) pronounced Jesuit vows in prison days before he was hanged, drawn and quartered. He met Jesuits while he was studying theology in Rome in 1580 and had asked to enter the Society of Jesus, but was not able to leave the people he served to go to Flanders for the novitiate, which was the normal policy at the time. Before he was able to get to the novitiate, he was arrested in the Dorsetshire castle of the family who had sheltered him for years and sentenced to die for high treason- celebrating Mass and converting people back to Catholicism.

The son of Irish parents living in Cornwall, the priest's true name was John Conor O'Mahony, but used his middle name in a Latinized form. He was expelled from Exeter College, Oxford, for being Catholic and left for the Continent to study. After he was ordained a priest in Rome, he returned to England and made the home of Sir John Arundell his base of operations. He placed himself under the direction of Father Henry Garnet, the superior of the English mission, while he waited for permission to make his novitiate, but was captured before he received an answer. One of the family servants betrayed him to the authorities, and he was arrested April 14, 1594, while hiding in a priest-hole in the Arundell family castle in Dorset. Prison officials in London tortured him in a vain attempt to learn the identities of the families who had sheltered him or those who had attended the Catholic services. Aware that his death was near, he pronounced the vows of the Society before a Jesuit and two lay people as witnesses. Then he was returned to Dorsetshire and condemned on July 2 to be executed for high treason. The sentence was carried out the very next day.