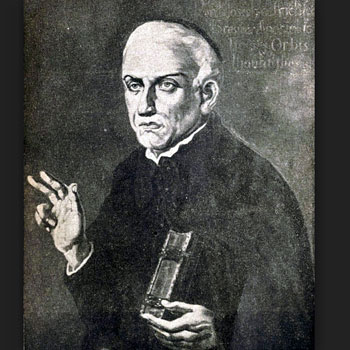 Joseph Imbert (ca. 1720-1794) was a parish priest who got swept away by the French revolution and died on a former slave ship that was supposed to take deported priests to Africa but never sailed. Imbert was born in Marseilles, France, and entered the novitiate in Avignon. He taught in three different Jesuit colleges after his ordination and was in Grenoble when the Society was suppressed in 1762. He then joined the diocese of Moulins, but was forced to relinquish his parish when he refused to accept the 1790 Civil Constitution on the Clergy. Instead of fleeing to safety outside of France, he remained to exercise his ministry underground. He was appointed vicar-apostolic of the diocese when the bishop was expelled. As the highest-ranking cleric in the area, he became a target of the Reign of Terror and was arrested in 1793.

Early the next year he and 24 priests of the diocese began a voyage to the prison ships that would deport them to Africa. The priests who arrived in Rochefort were jailed in hospitals, former convents and monasteries, and on two small ships anchored in the Charante River and used as infirmaries. On April 13 Imbert was moved to the ship, Deux-Associés that was anchored near a fortified island off the mouth of the river. The septuagenarian Jesuit struggled to climb the ladder; with the other prisoners he had to give up rosary, breviary and any other objects of devotion. By early May the captain of the ship refused to take any more prisoners because he already had over 400 priests crammed into the lower decks which had been designed to carry slaves. The priests could not stand upright in their quarters and were not given enough space to sit down the little time they were allowed on deck each day. Many prisoners became sick because of rancid food and filthy living conditions. Imbert was among the first to fall sick because he was already in poor health when he came on board; he probably had typhus and died only two months later. He was buried on a nearby island along with 226 other priest-victims.