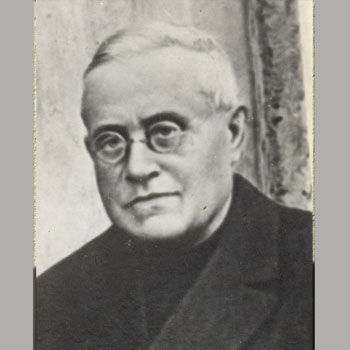 Juan Bautista Ferreres (1861-1936) was one of 11 Jesuits killed at the start of the Spanish Civil War in 1936. Although the Spanish revolutionary government had surpressed the Society of Jesus in 1932, a few Jesuits refused to go into exile. These martyrs were all killed between Aug. 19 and Dec 29, 1936.

Father Ferreres was a professor of moral theology and canon law at the Jesuit scholasticate and was well-known throughout Spain for his writing. When the revolution broke out he was living in Barcelona; he was arrested but released because he was 75 years old, frail and weak. He returned to his hometown of Ollería near Valencia, but was interrogated shortly after he arrived in mid-August and then arrested at the end of that month. He was soon moved to the prison infirmary, where he died after suffering a stroke and developing complications from lack of medical care. He died on Dec. 29.