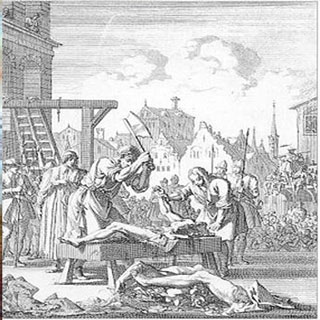 Robert Middleton (1571-1601) was one of several English martyrs who applied to enter the Society of Jesus but were imprisoned before they could enter the novitiate. As a young man in York, England, Middleton belonged to the Church of England even though his family was Catholic. At some point he began to practice his Catholic religion and then traveled first to Rheims, France to study at the English College there, then moved to Seville and then finally to Rome which he reached in April 1597. He was ordained a priest Jan. 4, 1598 and then a few months later left for his native land.

Middleton was able to work as a priest for slightly more than two years before he was seized and interrogated on Sept. 30, 1600. He admitted being a priest but denied any subversive activity. His captors sent him to London and then brought him back to Lancaster where he had been arrested. He was condemned to death for having been ordained overseas and daring to return and exercise his priesthood. As punishment he was hanged until almost dead, then cut down and beheaded.