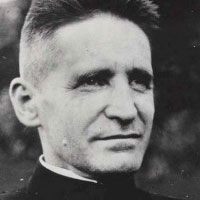 Rupert Mayer (1876-1945) was a man who held firmly to his convictions. After the Stuttgart, Germany, native finished secondary school, he told his father that he wanted to be a Jesuit. His father asked him to be ordained first, so Mayer studied philosophy and theology, was ordained and then served for a year as an assistant pastor before finally entering the Jesuit novitiate at Feldkirch, Austria, on Oct. 1, 1900. Later he would show the same resolve in opposing Adolph Hitler's National Socialist movement.

Mayer settled in Munich in 1912 and devoted the rest of his life to its citizens. He responded to the needs of people moving into the city looking for employment. He collecting food and clothing and searching out jobs and housing. His arena of action changed as Germany entered World War I. Mayer volunteered as an army chaplain, serving first in a camp hospital and later accompanying soldiers in France, Poland and Romania. He was legendary for his courage in staying with the soldiers in the front line of battle and was awarded the Iron Cross in December 1915 for his bravery. His army career ended suddenly when his left leg was shattered on Dec. 30, 1916 and had to be amputated.

He returned to Munich where people still suffered the war's aftermath. Once again the indefatigable Jesuit moved among people aiding them in any way he could. His leadership of the men's sodality led to increased membership and required Mayer to travel all over the city, giving as many as 70 talks a month. He introduced Sunday Masses at the main railroad terminal for the convenience of travelers. If Munich were a single parish, then he would have been its pastor.

As the communist and socialist movements grew strong, Mayer attended meetings and even shared the platform with their speakers so that he could engage the speakers by raising Catholic principles that contradicted what he saw as the evils to which these movements were leading people. Unlike many who witnessed Adolf Hitler's rise to power, Mayer saw the falsehoods that he was propagating. Since the Jesuit thought a Catholic could not be a National Socialist, conflict inevitably arose between him and the Nazis. More than a political stance, his opposition was a religious response to evil.

After Hitler became chancellor of the German Reich in January 1933, he made a move to close church-related schools and started a campaign to defame religious orders in Germany. Mayer used the pulpit of St. Michael's church in downtown Munich to speak out against this persecution. On May 16, 1937 the Gestapo ordered him to stop speaking in public because they could not tolerate his powerful influence in the city. He obeyed the order, except for inside the church where he continued to preach. He was arrested on June 5 and was imprisoned for the first of three times. He remained in Stadelheim Prison until his trial six weeks later when he was given a suspended sentence. His Jesuit superiors initially asked him to remain silent, but then allowed him to return to the pulpit to defend himself against defamatory attacks that the Nazis made during his silence. He was re-arrested and served his sentence for five months until a general amnesty freed him to return to Munich and work in small discussion groups.

The Nazis arrested him again on Nov. 3, 1939 although Mayer was already then 63 years-old; they sent him to the Oranienburg-Sachsenhausen concentration camp near Berlin. After seven months there his health deteriorated so badly that camp officials feared he would die. They did not want to turn the popular priest into a martyr so they placed him in solitary confinement in the Benedictine abbey at Ettal, in the Bavarian Alps, where he remained until American soldiers freed him in May 1945.

Mayer returned to Munich and immediately resumed his apostolic work in St. Michael's church. The years in prison had weakened him greatly. On November 1, 1945, the feast of All Saints, Mayer suffered a heart attack while celebrating Mass in St. Michael's; he collapsed and died shortly afterwards.