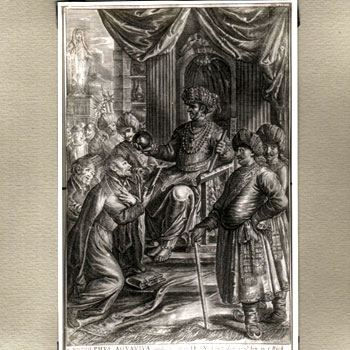 The son of the Duke of Atri, in Italy's Abruzzo region, Rodolfo Acquaviva (1550-1583) came from an illustrious family related to many of the noble houses of Italy. His uncle Claudio held the position of papal chamberlain in the court of Pope Pius V. The duke negotiated for 17-year old Rudolph to take over that post when the uncle resigned so that he could join the Jesuits. Instead of joining the papal court, however, Rudolph wanted to join the Jesuits. He needed several months to gain his father's consent before he could join the Society of Jesus on April 2, 1568.

After he finished novitiate and his studies in the humanities, philosophy and theology, Acquaviva was assigned to the missions in India. He left Rome for Lisbon, Portugal where he was ordained a priest in early 1578. His first assignment in Goa, India, was teaching philosophy to seminarians at St. Paul's College. Then he was sent on one of the great adventures of the early Society of Jesus: to be missionary to the court of Akbar the Great Mogul.

Akbar had an unquenchable thirst for knowledge and a desire to bring peace and harmony to his subjects, the Moslems and Hindus whose religious beliefs were at odds with each other. So he held weekly religious discussions at his court at Fatephur Sikri, near Agra. When he decided to include Christian theologians in these discussions, he sent emissaries to the Jesuit college in Goa to come to his court and instruct him in the Christian faith.

Father Acquaviva and another Jesuit arrived at Akbar's court in 1580, bringing a seven-volume copy of the Bible and hopes that the conversion of India would follow if they could convert the grand mogul. Akbar was greatly interested in Christianity and seemed convinced of its truth, but was not willing to give up his harem. After three years of effort, Acquaviva decided that Akbar would never be converted. The disappointed Jesuit returned to Goa.

Acquaviva became superior of the 12 Jesuits of the mission in Salsette, a peninsula south of Goa. Missionaries had visited there earlier but received a hostile welcome from the predominantly Hindu population, especially after punitive expeditions destroyed their shrines and temples. The Jesuits decided to start a new campaign to promote conversions and to visit all of the peninsula's 66 villages. They decided to start at the south most village of Cuncolim, but were stopped by a local leader who said they could not enter the village because of internal problems. After waiting some hours and hearing increasingly frightening shouts from the village, the Jesuits decided just to plant a cross on the site of a future chapel and to leave. The people who had been secretly watching them summoned hundreds of angry villagers who surrounded the Jesuits, attacking and killing first Acquaviva and then the other four Jesuits who accompanied him, Fathers Peter Berno, Alphonsus Pacheco, Anthony Francis and Brother Francis Aranha.