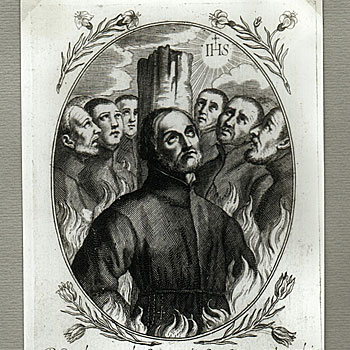 Thomas Akaboshi was born at Higo, Japan, around 1565. The son of a noble family, he served the daimyo of Higo. After his wife died, Akahoshi went to Nagasaki and became a catechist with the Jesuits. He went into exile with them in 1614, but returned with Father Sebastianus Kimura to Japan. The two were arrested together. Akaboshi entered the Society in prison at Suzuta and pronounced his vows before being burned alive. For more details of his martyrdom, see the account under the name of Blessed Carlo Spinola.