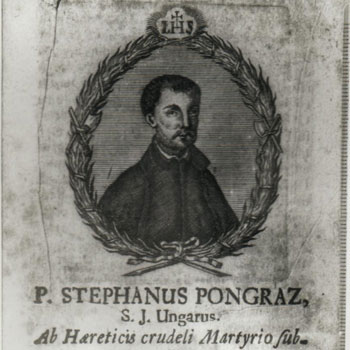 Fathers Stephen Pongrácz (1584-1619) and Melchior Grodziecki were sent to minister to the Catholics in Kosicie (now in Slovakia) during the religious conflict that cost the two Jesuits, and a companion diocesan priest, their lives. Kosice was a stronghold of Hungarian Calvinists during the early part of the 17th century. The few Catholics who lived in the city or in nearby districts had been without a priest for some time so the king's deputy in the city asked for two Jesuits to care for them. Pongrácz was a Hungarian who worked among his own people, while Grodziecki, a Pole, ministered to those who spoke a Slavic language and among Germans.

Father István Pongrácz was born in Alvincz Castle in Transylvania, entered the society in 1602, and studied in Bohemia and Austria. He had been ordained four years when he was sent to Kosice.

The two Jesuits were working in small towns when they heard the news that a Calvinist army was marching on Kosice in an attempt to expand the territory of Gabriel Bethlen, prince of Transylvania. The Jesuits returned to Kosice where they were joined by a diocesan priest, Father Mark Krizevcanin. The Transylvanian army took control of the city on Sept. 5, 1619, and immediately confined the three priests to the Jesuit residence. Before dawn on Sept. 7, soldiers broke into their quarters and demanded that they apostatize and accept Calvinism. When the priests refused to do so, the soldiers began beating the diocesan priest, stabbing him, crushing his fingers and rubbing flaming torches into his side. Finally they beheaded him.

Pongrácz was tortured next, with the soldiers twisting a rope around his head and almost crushing it. They hung him from the ceiling and cut him deeply before finally turning to Grodziecki who was beaten and beheaded. The soldiers threw the three bodies into a sewer ditch outside the house but Pongrácz did not die for another 20 hours.