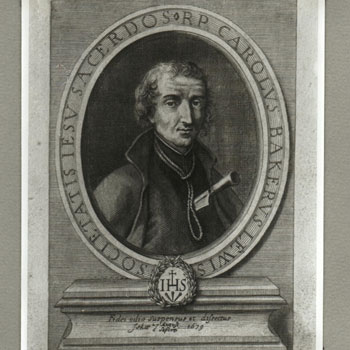 During his 31 years as a missionary in South Wales, David Lewis (1616-1679) was known to the faithful as Tad y Tlodion, "Father of the Poor." A native of Wales, Lewis came from a mixed family, his father being Protestant and his mother a Catholic, whose brother was a Jesuit priest. Lewis studied law in London, but became a Catholic during a long visit to Paris. After his parents died during an epidemic, Lewis left England for Rome where he enrolled at the English College, was ordained and then entered the Jesuit novitiate in 1645.

When he finally returned to Wales, Lewis spent nearly three decades in pastoral ministry, showing special interest and care toward the poor and needy. His fruitful ministry ended when Jesuits had to go into hiding after the plot fabricated by Titus Oates alleged that the Jesuits wanted to murder Charles II and re-establish the Catholic faith in England. Anti-Catholic hatred ran high and the government offered a bounty for information leading to a Jesuit's capture. A couple who had been Catholic turned Lewis in; he was arrested Nov. 17, 1678 just as he was about to begin Mass. Authorities moved him from one prison to another for months before he was finally hanged on Aug. 27, 1679. At the gallows, he spoke so well of his Catholic faith and his commitment to it that the people were moved and the executioner feared they might stone him if he killed the priest. He left the scene and a blacksmith was paid to take his place and finish the execution.