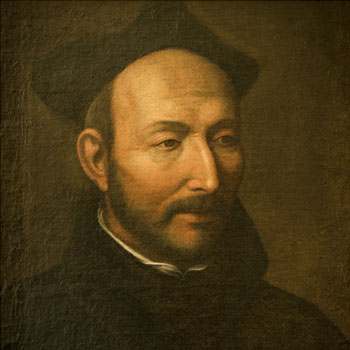 Ignatius Loyola (Iñigo Lopez de Loyola, 1491-1556) walked with a slight limp after being injured while defending the fortress at Pamplona in northern Spain. Slowed down by a lengthy recovery from that injury, he experienced an interior conversion that sent him on ever further journeys, a pilgrim propelled by an abiding devotion to Jesus Christ. He crisscrossed Europe, walking back and forth through Spain, France and Italy. He wandered further by boat, sailing from Venice to the Holy Land. Eventually he took the name Ignatius, which is how we now refer to him; but in his memoir, he preferred to call himself simply, "the pilgrim."

Beyond the physical distance and the endless roads, Ignatius covered a great historical distance. He moved from the medieval world of a family of minor Basque nobility—proud of their defense of the king and hostile to the rising power of the towns—to the flowering of Renaissance learning in Paris and the rebuilding of Rome under artists like Michaelangelo and reformers like Charles Borromeo. He lived during a period of transition shaped by key figures such as Henry VIII and Mary Tudor, Raphael and El Greco, Luther and Calvin, Cervantes and Palestrina.

Had he followed his family's plans for himself, the youngest of 13 children, he would have become a cleric and settled into a comfortable life with benefices to support him and privilege to protect him. His own plans for himself led to one dead end after another.

His first journey set the stage for what would follow. He left the lush, steep-sided valley of the Urola River where his family owned the best land in the center of the valley, in order to journey to the broad plains of the south where Ferdinand the Catholic, the King of Castile, ruled over a sophisticated and wealthy world. Ignatius was an ambitious young man who had no desire to stay at home with older brothers who had already won honor and some wealth. He wanted to become a courtier like his mentor, Don Juan Velásquez de Cuéllar, the royal treasurer who take Ignatius into his household at Arévalo. For 11 years Ignatius learned skills of administration, diplomacy, arms and courtly manners that would prepare him for a career in public administration and political intricacies. He dreamed of being sent as an emissary of the king or ruling over a royal town such as Arévalo. However, his mentor's fall from power for opposing the new king, Carlos I, put an abrupt end to that ambition.

Next came his service with the Duke of Nájera, viceroy of the northern part of the Kingdom of Navarre which bordered on France. After a promising start where his diplomacy and leadership qualities made him a "gentilhombre" very useful to the Duke, this second career also came to an abrupt halt when a French cannon ball badly injured his legs.

After his convalescence and conversion a new desire to serve Jesus replace his former hopes of glory. His first efforts in this new service led to a complete reversal of values as the proud courtier became a poor beggar, imposing harsh penances upon himself in a literal imitation of the legends of the saints. He set out from Loyola for the Holy Land, stopping first at the shrine of the Black Virgin at Montserrat. A one-night vigil stretched out to an intense year of prayer in the city of Manresa, not far Montserrat, before he continued his journey to Rome and Jerusalem. He planned to live in the Holy Land as a sort of permanent pilgrim, visiting the places where Jesus lived and talking with people about Jesus. When his reckless actions threatened the precarious situation of the Franciscans in charge of the holy places, they forced him to return to Europe.

Likewise, his initial efforts as a student at Barcelona, Alcalá and Salamanca were fruitless. Not until he learned to study in a disciplined manner at the University of Paris did Ignatius finally realize one of his plans--obtaining the education necessary to continue his work of conversing with people about God and spiritual matters.

In Paris other doors started to open for him as well. He met men who would be true companions and share his vision, men like Francis Xavier. Their education as Masters of the University of Paris qualified them for high positions; instead they set out as pilgrims looking for opportunities to serve God. Together these companions weathered the failure of their initial goal of going to the Holy Land; they waited in vain for an entire year for a ship to sail from Venice to Japha.

With their plans for the Holy Land frustrated, Ignatius and his companions turned to Rome where God's plan for them finally became clear. Rome became the center where the Society of Jesus came into being and then spread throughout the world. After all the previous journeys, Ignatius himself spent his last 18 years living in the crowded center of the city of Rome and working within a few small rooms. His most important journey continued, however, for it centered on his search for God and was graced with a profound mystical prayer.

Our most familiar image of Ignatius comes from this last part of his life. He is usually portrayed as a dour lawmaker pointing to the book of the Constitutions he wrote to govern the Society of Jesus. His own self-image remained that of the Pilgrim, which is how he constantly referred to himself as he dictated his autobiography towards the end of his life.