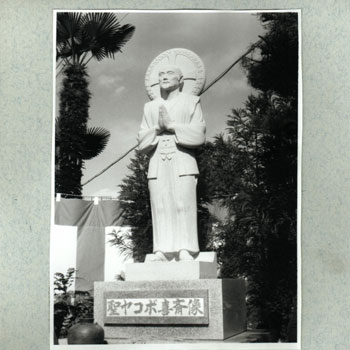 James Kisai (Iacobus Kisai 1533-1597) was one of the first Jesuit martyrs in Japan. He just happened to be in the same community when the police arrived to arrest the Jesuit Paul Miki. Although a Buddhist bonze educated him, Kisai was later baptized and married a woman who had also converted. She subsequently returned to Buddhism, leaving him with a son. Kisai entrusted the child to a Christian family and then moved to Osaka where he worked for the Jesuits as porter and house servant. The Jesuits eventually made him a catechist when they recognized the strength of his faith. He joined the Jesuits as a brother, probably in 1596. He was imprisoned along with Miki and John de Gotó. For full details of his story, see the entry for Paul Miki.