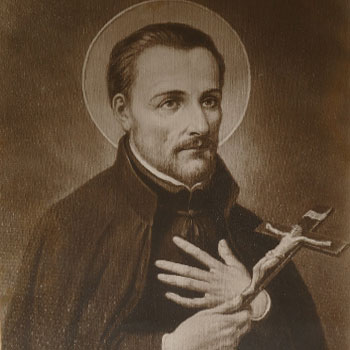 John Francis Regis (1597-1640) ministered to Catholics suffering neglect after civil conflict between Calvinists and Catholics devastated France. Much of southern France had fallen under control of the Huguenots who destroyed Catholic churches and killed the priests. Home missioners such as Regis had the task of rekindling a once-strong faith.

Regis was born Jan. 31, 1597 in Fontcouverte, in southern France. He entered the novitiate in Toulouse in 1616 and studied humanities, philosophy and then theology. His first assignment was teaching at the Jesuit school at Pamiers; then in 1632 he was sent to Montpellier to help the bishop there recall people to their faith. During two years as a home missioner there, he had outstanding results. The bishop asked for him in Viviers, but he took up the pattern of constant travel that marked the rest of his brief life. He walked from town to town, in rough mountainous area where travel was difficult, especially in the winter. He would remain in a parish several days giving sermons that were simple but sincere and flowed from a heart close to God. He heard confessions, celebrated Mass and catechized the children. He also visited prisons and collected food and clothes for the poor.

In mid-December 1640 the Jesuit missioner was giving a mission at Montregard; he interrupted his work there to return to his home at Le Puy because he had an intimation that he would soon die. He wanted to prepare for his death so he spent three days in retreat before making a general confession. Then he and his companion, Brother Claude Bideau, went back to Montregard to finish the mission there.

On Dec. 23 the two set out for Lalouvesc, the site of the next mission, but a winter storm blew in and they lost their way in the snow and had to spend the night in a battered shack. The next day they were able to reach Lalouvesc where they found people waiting for them. Rather than taking a few minutes to eat and rest, Regis immediately began preaching, then heard confessions and celebrated Mass. So many people came for confession that Regis did not stop until it was time for Midnight Mass. Both Christmas day and the following day were also spent in the confessional. Because of the crush of people, the Jesuit had to hear confessions in the sacristy where a broken window let in cold air directly on him. By late afternoon he felt weak and suddenly collapsed. He was put in the pastor's bed but people followed him even there, seeking to confess. He lapsed into unconsciousness, and the physician who attended him confirmed that pneumonia had set in. Nothing could be done. Regis lingered on until Dec. 31, praying constantly.