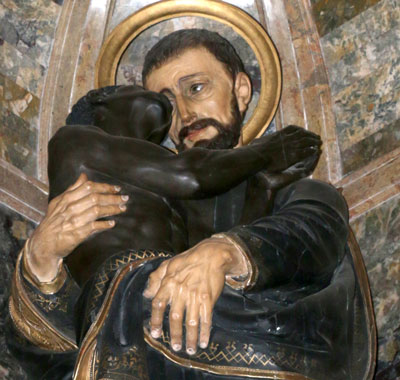 Peter Claver (1580-1654) devoted great care to slaves just arriving in South America despite the social convention that did not consider them human. For 35 years the Jesuit showed boundless compassion for abandoned people, living out the dictum of the St. Alphonsus Rodriguez, " Look for God in all men and serve them as images of him. "

Claver first encountered Jesuits in Barcelona during his university studies. He entered the Society of Jesus in 1602 and studied philosophy on the island of Majorca at the college of Montesión whose doorkeeper, Brother Alphonsus Rodríguez, was already known for the holiness that would later be recognized by the Church when it canonized him. The saintly brother encouraged the young Jesuit's desire to do something great for God and suggested he consider being a missionary in the New World.

Claver offered himself for the missions, and the provincial sent him to Colombia in 1610. After he finished his study of theology in Bogotá, Claver went to Cartagena on the Caribbean coast where he was ordained a priest in 1616 and where he would spend the rest of his life ministering to slaves who arrived in that port from Africa. Cartagena was one of two Spanish ports designated to receive slaves; an estimated 10,000 of whom passed through the port each year during Claver's time. They were usually in horrible condition after the long voyage. Claver waited on the dock with food he had begged. Accompanied by former slaves who served as interpreters, the Spanish Jesuit then boarded the ships and greeted those on deck before descending into the ship's hold to care for the sick. He cleansed wounds, applied ointment and bandages and spoke about God.

Slaves only remained in Cartegena for a few days, so Claver worked very quickly to prepare people for baptism. Instruction was necessarily limited, and Claver baptized a great number of slaves. He also visited hospitals, one of which cared for lepers, and saw Dutch and English prisoners of war.

A plague struck Cartagena in 1650, and eventually took Claver as a victim after he had cared for others afflicted by the disease.